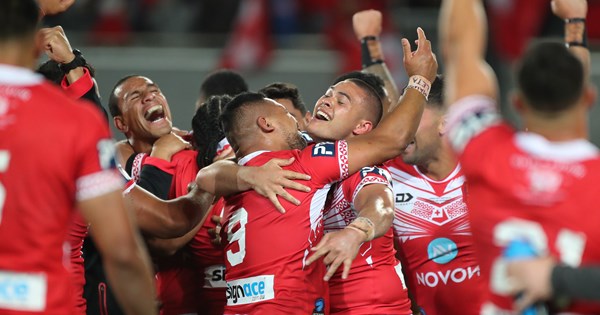 England head coach Shaun Wane is keen for the pair to talk to his squad before this autumn’s tournament starts.

Recently elected president of La Fédération Française de rugby à XIII, Luc Lascoste, has welcomed the announcement by Troy Grant, chair of International Rugby League (IRL), that efforts have begun to take the 2025 Rugby League World Cup tournament back to where it began in 1954.

Grant stated in his introduction to the media this week that he felt that returning the World Cup to France was a “targeted, strategic priority” and the initiative has been backed by such as Wayne Bennett, Michael Chieka and James Graham.

Paul Barrière - who held Lacoste’s position - was the proponent behind sport’s second-ever global competition, the inaugural RL World Cup final taking place at the Parc des Princes, Paris in front of over 30,000 fans principally supporting the hosts. Barrière now has the trophy named after him.

Commenting on the process to get the World Cup in its entirety back to the nation for the first time since 1972, Lacoste noted: “It would be an extraordinary opportunity for French Rugby League, its development and its return among the great nations. France must do everything to regain its place in the history of this sport because it can give it a lot in return - and it would be easier if the organization of the 2025 World Cup is possible.”

The French Rugby League Federation has officially declared its intention to bid for the 2025 Rugby League World Cup, taking it back to the country that founded the tournament in 1954. It was last played in its entirety there in 1972.
Reactions: Raboriginal

The board of European Rugby League (ERL) has issued a statement of support for the staging of the 2021 Rugby League World Cup in England.
Reactions: Raboriginal

This year's Rugby League World Cup in England has been postponed until 2022 after the withdrawal of champions Australia, and New Zealand.

According to the survey of people in France, organised by the Institute Francaise d’Opinion Publique (IFOP), 88% of respondents support the plan to organise the Rugby League World Cup in France in 2025.

In addition, the study shows that 69% of the French people would like the competition to take place in their region, giving support to the Organizing Committee's decision to host the competition in around 40 different towns and cities.

The proposed format of the competition will see, for the very first time, men’s, women’s, wheelchair, and youth competitions organised simultaneously and equally. A format that is proving very popular and has 88% general approval and 41% very supportive.

England's men and women kick things off with a double-header against France in Perpignan on 23 October.

England's wheelchair team host France in a two-Test series in Gillingham on 10 and 13 November.

RFL chairman Simon Johnson said: "It has been a priority to secure competitive international fixtures for our three England teams - men's, women's and wheelchair - this autumn as they refocus on the postponed Rugby League World Cup in 2022.

Australia and New Zealand will play in the re-scheduled 2021 Rugby League World Cup, organisers have confirmed. 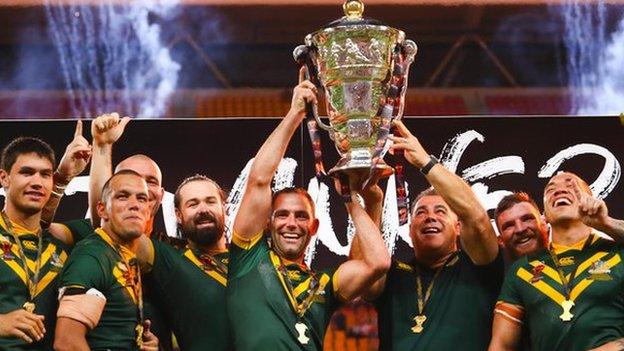 Manchester will host all three finals of the rescheduled Rugby League World Cup - with Old Trafford hosting the men's and women's finals.

Both finals will take place back to back on 19 November 2022, with the wheelchair final to be staged a day earlier at the Manchester Central convention centre. 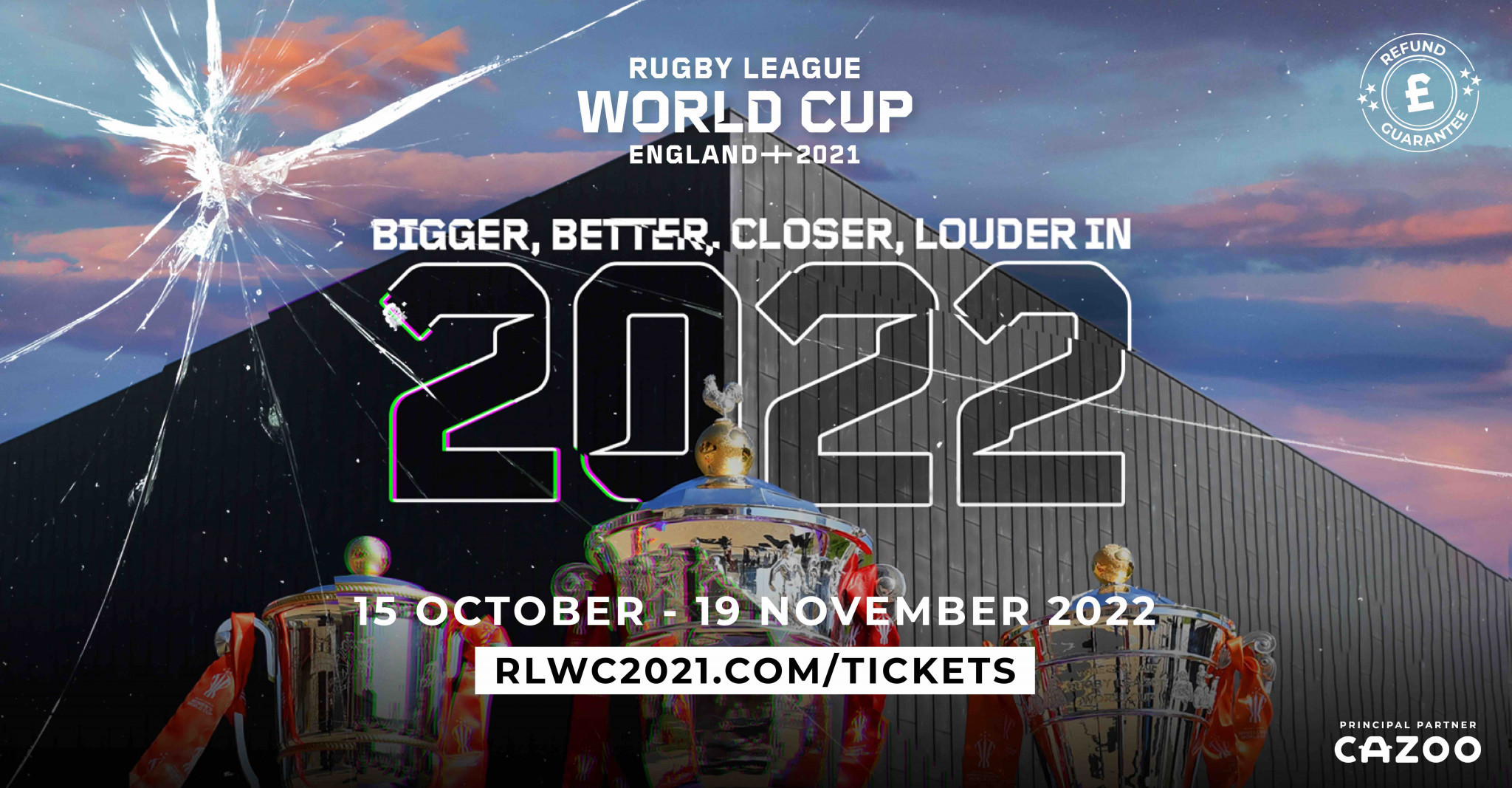 In exactly one year’s time, the biggest and best Rugby League World Cup in history will reach its thrilling climax in a showpiece weekend in Manchester featuring the wheelchair final followed by the double-header men’s and women’s final at Old Trafford.

Five weeks of world-class sporting action begins at St James’ Park, Newcastle on October 15 before Headingley Stadium, Leeds opens the women’s tournament on November 1 and a double-header at the iconic Copper Box, London kicks off the wheelchair event on November 3.

Only five RLWC2021 fixtures (four match-days) have been affected during the rescheduling of 61 matches staged at 21 iconic venues, across 18 host towns and cities. These changes involve the switching of two fixtures between existing venues in Leeds and Hull and the relocation of fixtures from Anfield Stadium and M&S Bank Arena.

In the men’s tournament there will be one venue swap with the match between Australia and Fiji on the opening day (October 15) now taking place at Headingley Stadium, Leeds due to a clash with another event in Hull. In return, the MKM Stadium, Hull will now host New Zealand v Jamaica in Group C on October 22 – a fixture that was due to be played in Leeds.

Wigan’s DW Stadium will provide the stage for the double-header which features the second men’s quarter-final as well as England women v Canada women on November 5.

Manchester will create further sporting history by hosting all three tournament finals over a weekend of global Rugby League celebration. Manchester Central in the heart of the city centre will now host the wheelchair final on November 18. The following day (November 19) the showpiece men's and women's double-header final will take place at Old Trafford, Manchester.

All 32 teams across the 21 competing nations participating in the men’s, women’s and wheelchair tournaments have fully committed to the revised tournament schedule in 2022.

General admission tickets and hospitality for all 61 matches will be back on-sale from 9am GMT today in line with the full schedule reveal. Tickets can be purchased via: www.rlwc2021.com/tickets

Fans who have already purchased tickets for fixtures that have been changed will be contacted with information on their options from November 24. A dedicated refund window will be available from then until November 30.

An air of guarded optimism surrounds rugby league as 2022 gets into full swing.

It's almost unnerving, given the levels of negativity and disunity that have swirled around the sport in the past few years.

But with a World Cup back on the horizon, a new terrestrial TV deal that could give the game more visibility and a slow move towards engaging with a "corporate partner" that could help maximise the sport's ability to maximise its commercial potential, the signs are promising.

That will include live coverage on BBC One and BBC Two of the triple header of women's Challenge Cup final and both men's semi-finals at Elland Road on Saturday, 7 May.