Newcastle's Kingston Park will replace Workington as the venue for three men's games at the 2021 Rugby League World Cup.

Kingston Park is the home of Newcastle Falcons rugby union club and Newcastle Thunder rugby league and has a capacity of 10,500.

The 2021 Rugby League World Cup will see the men's, women's and wheelchair tournaments staged together for the first time. Old Trafford will host both the men's and women's finals on 27 November 2021.

The World Cup draw will take place this November, once all the qualifying teams have been confirmed.

Spectators will enjoy spotting their accommodation in the distance.
Reactions: S J

It is fair to assume that organisers of the 2021 Rugby League World Cup cannot quite believe their luck.

With the Duke of Sussex, Prince Harry, conducting the tournament's first ever public draw at Buckingham Palace on Thursday in his first engagement since the shock
announcement that he and his wife the Duchess of Sussex, Meghan Markle, are to step back from royal duties, the eyes of the world will be on proceedings in a way no-one could have anticipated at the turn of the year.

Certainly by the end of this week, many more people beyond the sport's fanbase will be aware of the fact that England is hosting the tournament next year.

Free-to-air television coverage and more viewer-friendly kick-off times than the last World Cup in Australia will also help with engagement, especially if the hosts can go one better than they did in 2017, when England narrowly lost to Australia in the final, and win it for the first time.

After Great Britain's recent shambolic southern hemisphere tour when they suffered defeats to a Tonga Invitational side and Papua New Guinea in a 4-0 whitewash, expectations have taken a hit.

And other challenges still remain.

Organisers need to shift 750,000 tickets compared to in 2013 when England co-hosted with Wales, Ireland and France, and the target was just 500,000. The pressure will be on to avoid the sight of empty stands at some of the less glamorous fixtures.

Thirty two teams have to be planned and catered for, and there has been some anger that the rugby league hotbed of Wigan has not been chosen to host matches.
But from the arrival of the newly promoted Toronto Wolfpack into this season's Super League and the franchise's superstar singing Sonny Bill Williams, to the first three-Test Ashes series against Australia for 17 years staged here in the autumn, and the building of a brand new national rugby league centre in Manchester, 2020 is set to be an exciting year for the sport.

The hope that it helps pave the way for a World Cup that the sport is relying on to provide a timely boost and a lasting legacy. And which will enjoy the first proper milestone of its countdown in front of an intrigued global audience at Buckingham Palace on Thursday.

England, Scotland, Wales and Ireland will discover their 2021 Rugby League World Cup fixture schedules when the draw for the various guises of the tournament are made at Buckingham Palace on Thursday.


All four are represented in the men's competition, while Scotland, Wales and hosts England also await their fate in the women's and wheelchair events, which all run in tandem for the first time.

Australia are bidding to defend their men's and women's titles, while France are the reigning wheelchair champions from 2017.

�
Each team from each pool is drawn in turn from the pot, until there are no nations left, the draw is complete and each of the four groups has four teams.

Newspapers and news bulletins have been filled with reaction to last week's announcement made by the Duke and Duchess of Sussex that they intend to step back as senior royals and split their time between the UK and Canada.

But Prince Harry was in jovial mood as he attended Buckingham Palace to conduct the 2021 Rugby League World Cup draw. He was not doing any media interviews but a cheeky journalist shouted out: "Harry, how are talks going about your future?" He brushed off the question with a loud laugh.

Inside, he met with representatives from all 21 nations competing in the event next year. Comedian Adam Hills was there for Australia and Prince Harry commented on Hills' beard, saying: "One of the best manicured and styled beards I have ever seen."

He was all smiles during the draw itself, getting a good laugh from the watching crowd when he made the point of stirring the balls in the pot and then hiding his face.

Tournament organisers have promised the biggest and best World Cup in the sport’s history in October and November next year, and if the buzz surrounding the draw is even remotely matched during the tournament, they will almost certainly deliver on that promise. They will not, one suspects, have a backdrop quite as remarkable as this to build on, though.

Certainly off with a bang !

Hosts England have been drawn alongside Samoa, France and Greece in the group stage of the 2021 Rugby League World Cup.

England will play Samoa in the opening match of the tournament at St James' Park, Newcastle on 23 October.

Australia, who beat England in the 2017 final, are in Group B and have been drawn with Fiji, Scotland and Italy.

Meanwhile, 1995 and 2000 semi-finalists Wales have been drawn alongside Tonga, Papua New Guinea and the Cook Islands.

New Zealand, who were knocked out by Fiji in the 2017 quarter-finals, will face Lebanon, Jamaica and Ireland.

The draw was the first public appearance that Rugby Football League patron Prince Harry has made since announcing last week that he was stepping away from senior royal duties.

At the 2021 Ruby League World Cup draw hosted on Thursday at Buckingham Palace with HRH The Duke of Sussex, Canada’s national women’s team - The Ravens - currently ranked fifth in the world, were represented by Mandy Marchak, skipper of their 2017 World Cup side, who saw her nation drawn in Group A against hosts England, Papua New Guinea’s Orchids and newcomers Brazil.

“The Ravens made Canadians proud with their strong performance at the RLWC in Australia last time out,” said Bob Jowett, president of the Canada Rugby League Association. “We as an organization are all looking forward to striving to top that in 2021, not least facing the Brazilians in what will be a first North v South America clash,” he added.

The Ravens have already begun their preparations with a match last weekend which saw a Canadian Women’s West selection defeat their East counterparts 24-18. The match was held at Lamport Stadium Toronto, under their ‘Thunderdome’ - the ground which will house Toronto Wolfpack when they take their place in Betfred Super League next month.

Fourteen towns and cities have been selected as host training centres for the 2021 Rugby League World Cup, which will be held in England next year.

During the men's tournament, both hosts England and reigning champions Australia will be based in Manchester.

Thirteen of the bases are existing host venues for the tournament, with Preston the only centre not to be hosting a fixture of any kind.

Of the host stadia, only Coventry and Huddersfield will not house a team.

The men's, women's and wheelchair competitions will run alongside each other for the first time when it begins on 23 October, 2021.

London - where the Emirates Stadium, which will host a men's semi-final, and the Copperbox wheelchair venue are situated - will host teams. 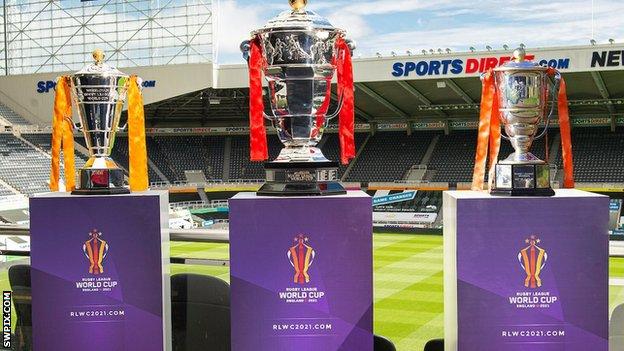 Organisers of the 2021 World Cup in England anticipate that the tournament will be the biggest and best ever staged in the event's 67-year history.

The men's 2021 Rugby League World Cup will kick off with hosts England against Samoa at Newcastle's St James' Park, and holders Australia against Fiji in Hull's KCOM Stadium on Saturday, 23 October.

England's women open their tournament against Brazil at Headingley Stadium in Leeds on Monday, 9 November.

The wheelchair tournament starts with a double-header on 11 November.

Spain face Norway in the first game and England then play Australia.

In the men's competition, Australia's opener against Fiji - a repeat of the semi-final in 2013 and 2017 - promises to be an exciting encounter, as does England's opener.

Reigning two-time champions France are the team to beat in the wheelchair competition, with games against Wales and Scotland in Sheffield on 12 and 15 November respectively.