stanleyg said:
if last nights games are anything to go by it will at least make the ball slippery.
Both losing sides had a lot of trouble with ball retention and catching a pass.
The side that can keep errors and poor ball control to a minimum has an advantage in those conditions
Click to expand...

We'll be right - don't you worry about that.

Word is Sloan may get a run. Might be a good idea - light weight on a very heavy course.

Well - what can you say. 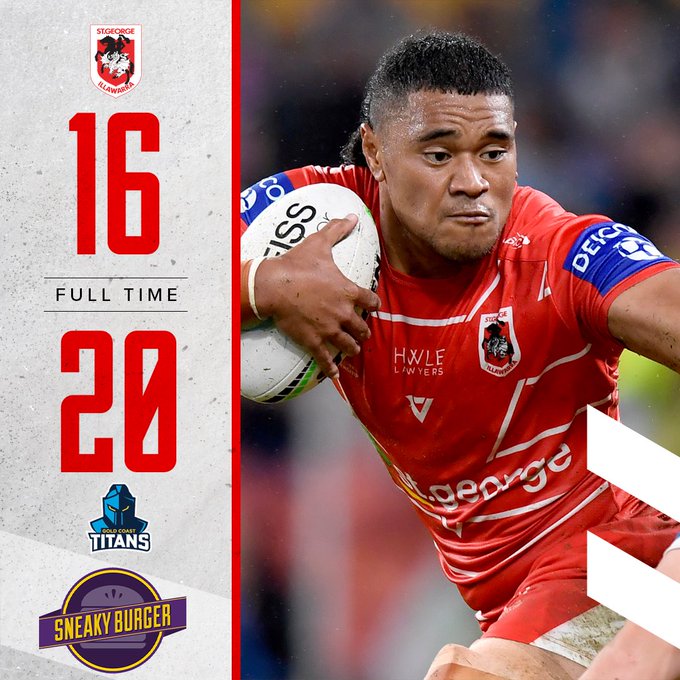 Not too much.
its been 12 years in a row now of serving up the same crap defensive style and catch n pass attack.
I said signing Hook for an extra year without seeing how HIS team went this season was a mistake.

Sloan showed some spark at FB and Amone in the halves.
Its a shame that they were the ones who made mistakes at the worst times.
They will get better though and Hook needs to persist with them seeing this season has gone.

We traded one slow dummy half in Macca for an equally slow one in MBye.

The hole in in our ruck area is growing like the hole in the ozone layer....one moment its not there then it as big as Sydney heads.
First half was lifeless from the Dragons who spent most of the time in their own 20 metre to goal line area as they do not value field position at all at the club apparently.
Second half showed more life but nothing to give hope
one offload in the tackle from Woods in the first half and two in the second half one of which was in the backline and Molo got one away as well..

Suli was our hardest runner and he was a back.
The Titans FRB had a field day running up metres as well.