The experienced mentor has also enjoyed success within the NSW Women’s Origin series.

S J said:
Intrust Super Cup clubs were invited to nominate a sprinter to take part in this year's race, which will take place before kick-off in this year's decider, with not only the incentive of being crowned the fastest player in the statewide competitions, but a handy cash bonus for their clubs as well.

The Bolt will be run over 80 metres between each 10-metre line and the person to cross the line first wins.

All participants will represent their clubs (and squads in the case of the match officials) with pride, and are required to wear their team jersey and teams shorts. One thing they can't wear, however, is running spikes, with race to be run in either runners, football boots or bare foot.

The Gatorade Bolt will be run at 2.40pm and features some noted speedsters from the Intrust Super Cup and Hastings Deering Colts competitions, including Will Partridge from the 'home team', the Redcliffe Dolphins, and Townsville Blackhawks young gun Daniel Rigano, who will also be cheering on his team mates in the Colts decider earlier in the day.

Fans at the Intrust Super Cup grand final were treated to more sporting excellence with the running of the Gatorade Bolt which was taken out by Burleigh Bears flyer Luke De Vlieg. The speedster won $1000, courtesy of Gatorade. 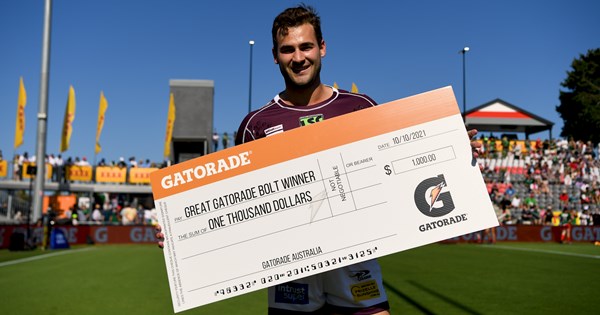 Fans at the Intrust Super Cup grand final were treated to more sporting excellence with the running of the Gatorade Bolt which was taken out by Burleigh Bears flyer Luke De Vlieg. The speedster won $1000, courtesy of Gatorade. Video: Colleen Edwards and Brayden Davies / QRL

The PNG Hunters have re-appointed Matt Church as coach for the 2022 Intrust Super Cup season.

The Hunters board voted unanimously for Church to remain at the helm for next season after he steered the team through the challenges of 2021 when it was forced to relocate to southeast Queensland due to COVID travel restrictions.

The Hunters have confirmed that the team will return to Queensland throughout 2022 due to the ongoing international COVID travel challenges.

The Townsville Blackhawks have confirmed their five statewide competitions coaches for season 2022.

Earlier this year, it was announced Aaron Payne would be remaining in his role of head coach of the Intrust Super Cup team.

Steve Sheppard will take over the Hastings Deering Colts in 2022, after taking the Auswide Bank Mal Meninga Cup side to the grand final this year. Sheppard also performed as Payne’s assistant coach.

Harvey Norman Under 19 Girls assistant coach Rob Hall will be coach after the departure of Pete Edmonds.

Nathan Norford will stay on as coach of the Cyril Connell Challenge boys.

Blackhawks football operations manager Adrian Thomson said he was pleased with the appointments. 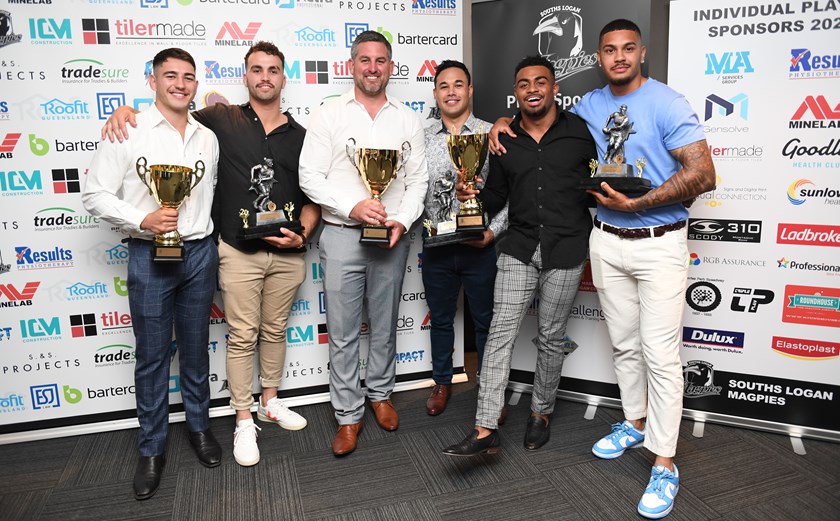 A captain’s effort from Ross Bella this season was rewarded with player of the year honours at the recent Mackay Cutters awards event.

Bella, who recently re-signed with the club, took home the Col Grosskreutz Medal, named after local rugby league identity who had a long and decorated involvement in the game in Mackay as a player and a coach.

The Hastings Deering Colts team did the club proud in season 2021 by making the finals, with their halfback Henri Stocks taking the honours as the team’s player of the year.

A huge supporter of female football in North Queensland in particular, Harvey Norman Under 19 coach Marco Peters took home the club person of the year award.

Prop William Samuel completed his 2021 season in style, winning the three most honourable awards at the Brisbane Tigers players awards evening on Thursday.

Samuel not only claimed the best and fairest award for the club, but was also named players’ player. The hard-working forward also took home the club’s prestigious Jack Loth Medal.

PNG Hunters have announced the re-appointment Scott Barker as CEO for the 2022 season.

Barker has completed his first Intrust Super Cup season as general manager, guiding the Hunters through a challenging year which saw them move operations to Queensland because of COVID restrictions.

PNG Hunters chairman Stan Joyce CSM was pleased Barker would remain at the helm, noting his work during the 2021 season positioned the Hunters well for a strong 2022 return.

South Sydney have signed outside back Isaiah Tass for season 2022.

Tass, 22, is a centre or winger that has previously been part of the full-time squads at the Canterbury Bankstown Bulldogs and Brisbane Broncos in 2020 and 2021 respectively.

Tass turned in a strong season in the Intrust Super Cup with the Souths Logan Magpies in 2021, scoring 126 points in 15 games last season. Tass scored nine tries and kicked 45 goals, helping the Magpies reach the second weekend of finals this year.

He's off to Cronulla next year.

Wynnum Manly Seagulls rake Harrison Graham is soaking up every little bit of his six-week train-and-trial with the Brisbane Broncos.

Three weeks in, Graham, who starred in Wynnum Manly's Hastings Deering Colts premiership-winning team, said he was enjoying his first pre-season with an NRL team.

What better time of year to spread love and joy to the most vulnerable in the community than at Christmas, and that is exactly what Ipswich Jets will do with their first Christmas breakfast for the homeless.

Jets chief executive officer Richard Hughes said Christmas was one of the toughest and loneliest times of the year for a homeless person, so the vision for the breakfast was simple - "fill stomachs and hearts".

The Tweed Seagulls celebrated their strong 2021 Intrust Super Cup and Hastings Deering Colts seasons with a sponsors event where they announced their award winners for the year.

The club featured in the finals for both competitions, with the Cup side looking to build on their semi final performance in next year’s Hostplus Cup competition.

Robson, who is currently training during the pre-season with the Gold Coast Titans, was a rock in defence for his side and made 468 tackles at a tackle efficiency rate of 97.1 per cent in season 2021.

Another forward in JJ Collins was another big winner and was named the side’s players’ player winner.

Collins, who was considered a marquee signing for 2021, was a strong performer all-round, making 36 tackle breaks and 1021 post-contact metres, as well as averaging 128 run metres a game.

Centre Lee Turner regularly featured in the weekly Cup Team of the Week and was rewarded by his club with the coach's award.

Turner topped the 2021 season equal first with the most line breaks in Cup, finished third overall for tackle breaks and he is currently completing a train-and-trial with the Titans.

Charlie Murray co-captained the side to a finals series with the mantra of “extra effort” and led by example both on and off the field. Murray’s consistent performances earned him a debut in Round 13 of Cup.

For his wholehearted efforts, Colts coach Matt King was more than happy to hand Murray the coach's award for 2021.

Edwards came into the season with something to prove and was able to show time and time again how valuable he is to a team with his never-say-die attitude on the field.

The Ipswich Jets have announced their full team of coaching staff for a busy 2022 season at the club.

Scott Murray has been appointed the Hostplus Cup head coach at the Redcliffe Dolphins for season 2022.

The PNG Hunters are delighted to announce that the Gold Coast Performance Centre in Runaway Bay will once again be the home away from home for the team in 2022.

Located at the northern-end of the Gold Coast, the Gold Coast Performance Centre is a premier sporting facility boasting state of the art equipment and lodgings and the Hunters are excited to continue this relationship into the 2022 season after living and training onsite there last year.
You must log in or register to reply here.
Share:
Facebook Twitter Reddit Pinterest Tumblr WhatsApp Email Share Link
Top Bottom