A new 49ers coach and plenty of running back and receivers. Also, 4-5 clubs in the NRL want him and he knows that. I full sorry for the Fiji Union squad because he'll get picked...for sure.

S J said:
SMH: Explosive new documents allege Brisbane recruiter Peter Nolan gave star playmaker Corey Norman cash payments at Top Ryde car park during his time at Parramatta as part of the club's rorting of the salary cap.
Fairfax Media has obtained a sworn statement by former Eels chief executive Scott Seward and the transcripts from the interview the NRL integrity unit conducted with former football manager Jason Irvine. The accounts detail the illegal payments dished out to Parramatta players, including the third party and cash variety, that were guaranteed by the club in contravention to NRL rules.

But the biggest twist in the saga is the alleged involvement of Nolan, considered one of the best talent spotters in the game. Seward and Irvine describe Nolan – who discovered Semi Radradra at a rugby Sevens tournament – as one of the administrators fully aware of a secret payments scheme designed to circumvent the salary cap.

In his signed statement, Seward writes: "Corey Norman was promised additional payments of $36,000 which was to cover rental payments of approximately $3000 per month.

If true - no wonder Clubs like Saints had no way to get these players.
Click to expand...

The NRL has deducted all of the comp points gained during the known period of breaches of the salary sombrero.

The NRL has already imposed the maximum fine of one million Aussie pingers.

The NRL as banned the real conspirators, all five of them, for life - one hopes.

I'm as aggrieved as anyone, especially that the 2016 NRL 9s has no official winner, but at some point, the expression "Flogging a dead horse" will provide what little comfort can be salvaged from this crappy situation. Personally, I'm already there.

Runners up should be crowned the winners.

ALX22 said:
Runners up should be crowned the winners.
Click to expand...

The runners up didn't exactly win either but like in the Olympics if someone is eventually DQ ' d for blood positive to banned substance years later they do move the 1st of the losers up a notch and give them the gold. 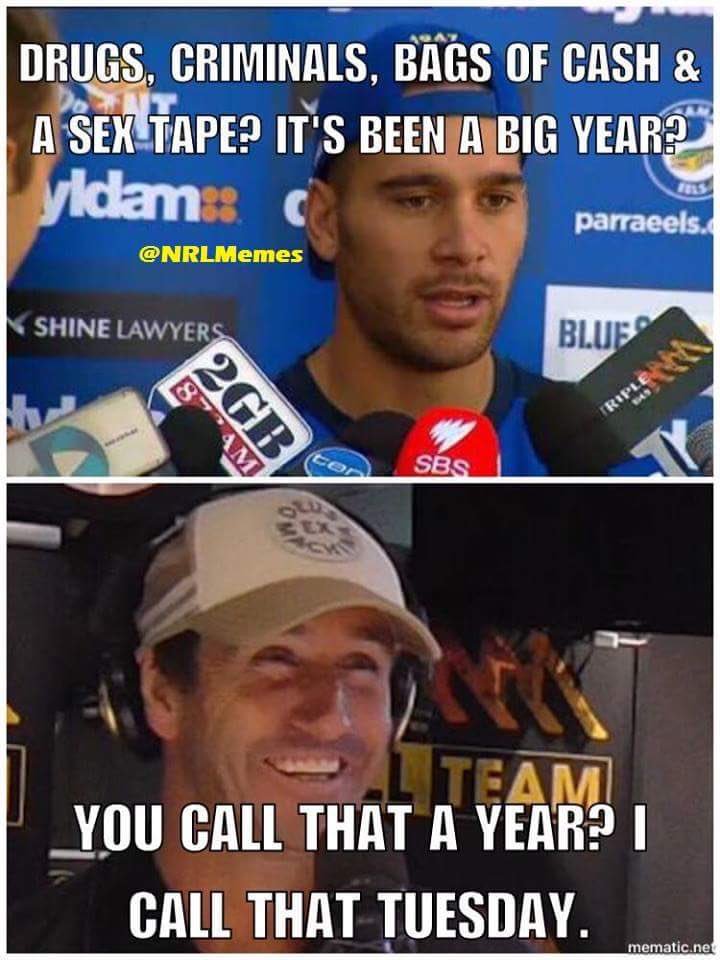 Is that Corey Norman in the top half?

The Saints have put in bid. Good move Saints, Norman has talent to burn.

I like S J analogy Pictures, though Norman has a good coach - Brad Arthur, Mary Mcgregor may have a different measure of players in his team.

. If there has been an attempt at Blackmail (oops I mean extortion ) there should be a rigorous investigation by police not NRL.
If the Dragons manage to get his signature he would have to unlearn a lot of his good play to fit in

stanleyg said:
Norman is a good player and apparently a good on film to

. If there has been an attempt at Blackmail (oops I mean extortion ) there should be a rigorous investigation by police not NRL.
Click to expand...

I hope it's NOT a 60 minutes report

With Kent on 360 from the top to the bottom eels needs a good talking too (not the exact words -bazza!) and sterlo today said something like Norman shouldn't apologize and also, Hayne on the back page - Kelli Underwood should be congratulated on the NFL and trying to have a go with 7's Union. I'm not sure if Kelli knows the financial problems with Parra when Hayne was there (5 director who orchestrated it), but Parra fans want him back.
Hopefully the eels will get more structure with 5 new board members if not next year, I may join the Titans - I've said that a few times, but end of season if the current board or new repeatability directors and new players and leaving players! Then I will know.
Last edited: Jul 13, 2016

The board is checking the accounts and consulting lawyers.
I think they will appeal on the grounds of "denial of natural " justice no matter how much it costs Parra who will have to pay as the board was acting for parra when the rorts allegedly occureed..
Pisser Carney was using the same defence to claim damages from the sharks and that has gone quiet so you have to wonder if it was settled "under the table"

The Titans haven't exactly been clean skins either Bazza but seem to have put their issues (drugs, corporate financials, centre of excellence etc) behind them

PARRAMATTA chairman Steve Sharp has fallen on his sword and stood down ahead of the government’s plan to sack the entire Eels board.

Sharp made his decision public in a letter to Eels members on Saturday evening in which he also stated that “persons with improper motives will always seek to gain control of our great Club and will by any means necessary attack, blackmail, or smear those in power to do so”.

Sharp also requested that the justice minister Troy Grant appoint a temporary administrator to replace the board for the foreseeable future.

“Regrettably I will not be a part of that future but I trust that the State of NSW will be able to do what myself and the Board were unable to do and overcome the political, constitutional and organisational challenges that need to be addressed at the Club before handing it back to the members and a revamped, constitutionally elected Board,” he said.

His letter to members follows a tumultuous day for the club with Mr Grant already having made the decision to take the extraordinary action of removing the entire Parramatta Leagues club board — possibly as soon as Monday.

The major development, which will be supported by NRL chief executive Todd Greenberg, Grant declared that he has the legislative power to oust the current leagues club board.

Grant said he would appoint a temporary administrator after the NRL club’s plans to appeal some of the penalties for salary cap breaches. He will use legislative powers under the liquor and gaming act. The Parramatta Leagues club is under investigation by Liquor & Gaming NSW and the government believes it has enough evidence to remove the board.

“Overall there’s now a question that has come forward about whether the board is being effective in the interests of the members of the leagues club,’’ Grant told radio 2GB’s Ray Hadley.

Kieran Foran would need to convince the NRL he was in a fit state to resume playing if he succeeds in gaining a release from Parramatta and wanted to join another club next season.

Foran last Friday officially requested a release just nine months into his $4.8 million, four-year Eels contract to deal with personal problems that earlier this season culminated in him standing down from playing to seek treatment after being rushed to hospital following a prescription drugs overdose. Heavy heart: Kieran Foran is reportedly not interested in football as he continues to deal with personal issues. Photo: Getty Images
Parramatta are expected to grant Foran a release in a move which may pave the way for the return of Jarryd Hayne for the rest of the season on the proviso he signs a multi-year deal with the club. While those close to Foran insist playing again is the furthest thing on his mind, there would be no shortage of bidder for the New Zealand captain and five-eighth, who is considered the highest paid player in the game.

Canterbury, whose coach Des Hasler has a close relationship with Foran from their time together at Manly and twice previously went close to signing him, and the Sea Eagles would both be expected to make a play for the star playmaker.

However, Fairfax Media can reveal that any club which signed Foran would need to satisfy the NRL that he had overcome his off-field problems before they would register a contract for the 25-year-old. The process is similar to the one the NRL applies for players who have been in trouble off the field, such as St George Illawarra prop Russell Packer or Sydney Roosters centre Blake Ferguson, as officials want to avoid having to deal with any future problems.

The Eels have given no indication of when Foran's request will be considered but there may be greater urgency to make a decision if they reach agreement with Hayne in coming days to play the remainder of the season.

Advertisement
Hayne arrived in Sydney on Thursday after missing selection for the Fiji rugby sevens squad to compete at next month's Olympic Games in Rio.

Having quit San Francisco 49ers earlier this year after leaving Parramatta at the end of the 2014 season to pursue his dream of playing in the NFL, the 28-year-old is expected to return to the Eels but there is interest from other NRL clubs as well as rugby union in Australia and overseas.

The bold move, which saw him play eight matches for the 49ers last year, cost Hayne financially compared to what he would have earned had he stayed at Parramatta and his best option to recoup the money may be a stint in French or Japanese rugby union but he would still command more than $1 million per season in the NRL. "It's been a hectic five weeks, physically and mentally and emotionally," Hayne told Channel Nine. "I'll sit down with my manager over the weekend and, you know, and kind of debrief."

Meanwhile, the Eels will hold an Extraordinary General Meeting on August 22 with a new board to be finalised by October 10. It is understood the club has ruled out appealing the deregistration of the five Eels officials – chairman Steve Sharp, chief executive John Boulous, head of football Daniel Anderson, and board members Tom Issa and Peter Serrao – for their roles in the salary cap breaches that have cost Parramatta 12 competition points and $1 million fine.

However, the Eels are expected to appeal the severity of the penalties imposed on the club for breaches dating back to the 2013 season.

Very nice of Mr Sharp to "fall on his sword" before he got booted but even so his statement still makes him out and his fellow board members to be the good guys struggling against the bad guys "with improper motives".
You would think he could have just said he was quitting because he and others buggered it up at the eels.
The only real political , constitutional and organisational challenges were the boards own "ethics" and their inability to work within the rules or being able to cheat successfully

All I'm hoping for next year with a new board and the footy players and fans just speaking reading about League. Maybe that's the wishful thinking Bazza.

At half time against the choccy soldiers Parra was looking good and my last thought was they could very well catch and pass the Dragons.
I came back nearly 20 minutes into the 2nd half Penrith had made a come back.
Even allowing for rushed handling errors the finish to the game was a credit to both sides and exciting to watch.
Mansour was back to his best playing in a club game while Moylan was solid in the 2nd half at FB.

Just watched it. Terrific game of footy that neither side deserved to lose. If only more games were like that!

And Mansour! The strength and stamina of that guy!

moto748 said:
And Mansour! The strength and stamina of that guy!
Click to expand...