EurFed Other - News and Views

Wales opened their European Championship campaign with an impressive win over defending champions Scotland in Wrexham.

Ireland were beaten 31-14 by France in Albi in their opening match of the 2015 Rugby League European Championship.

Was that the full French squad? I know Ireland have a reasonable team these days but i would have thought the French in France would have toweled them up.

Wales moved to within a draw of winning the European Championship for the first time since 2010 with a 14-6 win over France at Cardiff Arms Park.

A draw or victory against Ireland on Saturday, 7 November in Bray would secure the title, having beaten holders Scotland in the tournament opener.

France, who beat Ireland last weekend, now have not won a Test in south Wales since 1948.

Davies also added a conversion to give the hosts a 14-0 lead, before Mickael Simon scored under the posts for France and William Barthau quickly landed the extras.

Wales secured the European Championship Rugby League title by beating Ireland 30-4 in Bray on Saturday.
The Welsh, needing only a draw to clinch the European title for the first time in five years, all but secured victory by half-time with a 22-0 lead.
Dalton Grant, Lewis Reece, Steve Parry and Rhodri Lloyd scored first-half tries for John Kear's Wales side.
Elliot Kear added a second-half try for the visitors with Callum Mulkeen replying for Ireland late on.
Courtney Davies kicked 10 points for Wales, whose victory secured them the title at the expense of France, who defeated Scotland 32-18 earlier on Saturday.
Grant's try edged Wales ahead after Davies kicked a penalty deep into Irish territory.
And after Liam Finn and Elliot Cosgrove had both threatened the Wales line, the visitors broke away for a second try when Reece reacted first after Casey Dunne had dropped a high ball.
With Ireland wasting further promising attacking opportunities, they were made to pay with Parry and Lloyd both crossing for the Welsh before the break.
Kear punished more poor Irish defending in the second half as Davies added to his haul of kicked points.
Ireland's sole score came in the 72nd minute as Mulkeen touched down in the corner, but it was scant consolation for the well-beaten home side as Wales celebrated. 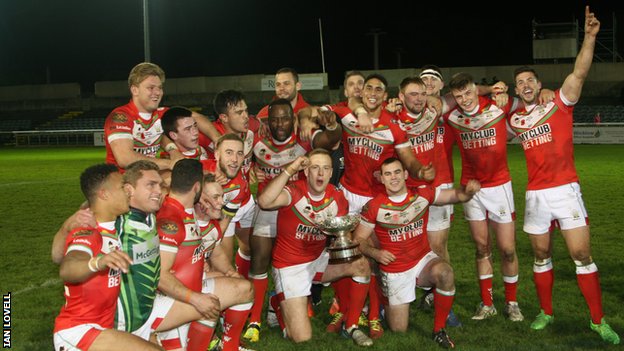 Interestingly Wales won the european cup this year but it is Scotland who won it last year who will go through to the 4 nations....despite coming last this season. Work that one out.

Wales will launch a women's rugby league team this year, with the aim of competing at the 2021 Women's Rugby League World Cup. England will host that tournament and will provide the opposition for Wales' first women's Test match, which will take place at the end of this summer. A three-game East v West Origin series will take place first in south Wales.

Players who impress will join others from north Wales and the English leagues in a Wales training squad.

Gareth Kear, representing the WRL board in the community game, said: "It's an exciting time for Wales Rugby League as we build towards the men's and women's World Cup in England in 2021.

A Women's Super League was launched in England in 2017 and the competition was expanded to eight teams for 2019.
Reactions: Q'BillieBoy

As their wheelchair side prepare for their debut in the 2021 Rugby League World Cup, and more youngsters are playing the sport in the country, Norge Rugby League has elected a new president.

Full-time student Jonatan Dam, a player for Sandnes Raiders since 2017, has taken the reins from Karl-Fredrik Sandelin Velle, who helped establish the sport in the country.

Twenty-three year old Dam, who is studying for a BSc in physiotherapy as well as running his own business as an online coach making strength programmes for athletes, found rugby league by accident. “It was pure coincidence - having seen a Facebook ad, I was hooked,” he said on acceptance of the role.
You must log in or register to reply here.
Share:
Facebook Twitter Reddit Pinterest Tumblr WhatsApp Email Share Link
Top Bottom