Lulu cleared from groin injury but not selected.

The Kiwis are hoping influential five-eighth Thomas Leuluai will feature at the Rugby League World Cup after scans cleared him of a serious injury.

The 28-year-old Leuluai remains sidelined with a groin injury, but manager Tony Iro says the prognosis is positive.

"The scans have come back all clear with no tear, so it's just a matter of managing it as best we can," Iro said.

"We know how important he is to the side, both in a leadership capacity and as a player so we're prepared to wait.

"We'd like to think we've got another month in this tournament and we think that's plenty enough time to get him back on the field and 100 per cent."

Iro says when Leuluai is fit enough to return to the side, he'll inform the coaching staff.

"He was still feeling a little sore last week, with the type of injury it is, it's up to him when he's feeling better and then we'll start giving him a run."

Hulking winger Manu Vatuvei is likely to start against Papua New Guinea in Leeds on Saturday, after missing the victory over France in Avignon.

Iro says he probably could have played last week, if they needed him.

"We just wanted to give him as much time and make sure he's 100 per cent right. He wasn't quite there last week and he's a big guy and another important cog in our attacking part of our team. He's ready to go."

Fullback Kevin Locke is also expected to be fit for selection, despite sitting out a large part of training after being crunched in a Sonny Bill Williams tackle.

Kiwi fullback Josh Hoffman says his side will need to iron out a little rustiness to be ready for a "very physical" Papua New Guinea side.

Kiwi fullback Josh Hoffman says his side will need to iron out a little rustiness to be ready for a "very physical" Papua New Guinea side that will be buoyed by its recent entry to the Queensland Cup.

Hoffman left the controversy over his future with the Broncos to the side as he turned his focus to the immediate challenge – a meeting with the Kumuls on Saturday morning (Friday night UK time) in Leeds.

Hoffman predicted PNG would play a very physical game, but not necessarily a highly structured one.

"A lot of their players will be ad-lib. I believe with their halves, Ray Thompson will be the man to direct them around the park," he said.

On news of the country's recent admission to the Queensland Cup, Hoffman said it represented a great opportunity for the nation of Papua New Guinea but also for the locals and everyone in the Queensland region.

"It will be good for them going into the competition. They've been trying to bed a side in for a long time now and the time's finally here," he said.

"They're a very rugby league-orientated people and they love their footy. It will be interesting to see how they go."

Hoffman tipped the PNG side to get a welcoming reception from the locals. "They're a very friendly people, everyone loves them and as I said it will be interesting how the whole competition goes and how they go in the Queensland Cup," he said.

Hoffman said the Kiwis' performances so far were still a little rusty, despite the fact they have won both matches comfortably.

"We're still working our way into it but as it's coming down to the business end there's not a lot of time for building combinations – so as Friday night comes against PNG we really have to knuckle down," he said.

Looking ahead, Hoffman said the Australians still represent the Kiwis biggest challenge to retaining their title as world champions.

"Obviously the Aussies are probably the biggest threat and always have been," he said. "Throughout every Test match when they've played the Kiwis, they've always been a threat. It's no surprise we'll be going in as underdogs with the Kangaroos being the benchmark."

On his battle with the Warriors' Kevin Locke for the black number one jersey (a position which has itself attracted controversy for Hoffman following recent public comments from Broncos teammate Justin Hodges), Hoffman said the competition was good for the squad overall.

"We're both pretty humble about it; it's always good having a bit of competition in tournament and it makes you play a bit harder for the jersey," he said.

"Off the field I can say we hold no grudges, we're both characters and both like to have a bit of a laugh. We're fighting for the same jersey so when that day comes and [New Zealand coach] Steve [Kearney] names that 17 man squad it's [a case of] 'see who gets the job done.'"

Hoffman said he would need to continue to make improvements to his game to stay in the frame as Kearney's first choice fullback.

"I think just a lot of involvement from myself and plenty of talk amongst the team, the playing group. There's nothing better than having a fullback that talks a lot and brings the best out of the other players," he said.

"Also trying to work on little things. There's been a lot of controversy about my passing game, I have to brush up on that but it's something I've been working on, it's not something that comes naturally, you have to groom into it and that's what I'm trying to do."

Is it because he's so used to scoring tries he doesn't need to pass?

"Haha, the whole this year, you know, I never had to worry about passing a ball, just diving over the line," Hoffman laughed.

"But being back in the Kiwis camp, it's brought a lot of confidence out of myself. Playing fullback, it's allowed me to try new elements to my game," he said. 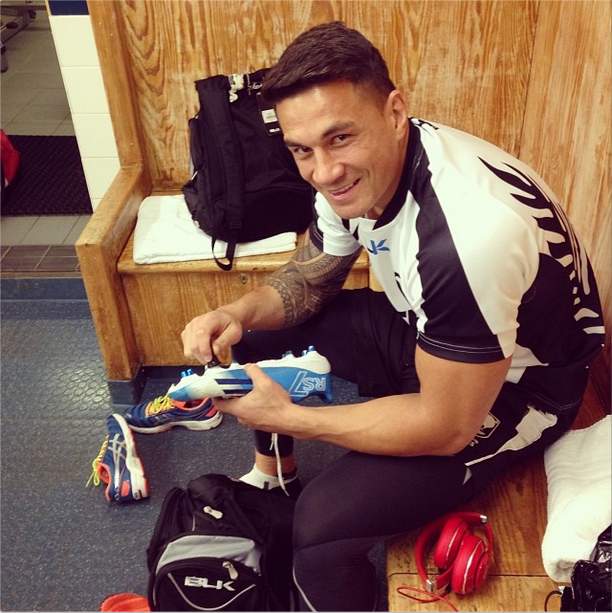 Seriously mate, after the last game...I'd put the chains on!

I can't figure out if you're in the UK or Aus/NZ, Terry. Either way, you never seem to sleep!

moto748 said:
I can't figure out if you're in the UK or Aus/NZ, Terry. Either way, you never seem to sleep!
Click to expand...


Many of the dedicated Leaguies over here, in Auckland, are on UK time at the moment for the RLWC show.

Plus, when you're a contract programmer, you tend to work to project deadlines and monthly milestones, so the hours are pretty flexible.

Plus, there are some highly caffeinated softdrinks about to keep you rolling along.

What's the score in the NZ game? Scotland 8-0 down at half-time.

Issac Luke will be a key man again for New Zealand against the Kumuls.

In terms of tournament progression this game may be viewed by many as a dead rubber but you can bet none of the players from either side will be looking at it that way.

For the league-mad Kumuls this final group game will be their last appearance at this tournament, and as such a final chance to extract some positives from what has been a disappointing fortnight. However they could still progress with an unlikely upset win, provided France go down to Samoa (on Monday night UK time, Tuesday morning Australian time).

For the Kiwis, it’s a chance to continue to build momentum following that crushing win over France, to put the other top sides on notice, and for the players scrapping for a spot in the best 17 to prove to coach Stephen Kearney that they deserve to stay in that top side.

Even if the Kiwis do suffer an upset loss, Samoa would still need to put an absolute cricket score against France to dislodge the Kiwis at the top of Group B, meaning New Zealand’s place atop the group is all but assured.

Elijah Taylor moves into the starting side at lock, with skipper Simon Mannering earning a rest (meaning a second run as captain for Kieran Foran), and Sam Moa joins the 17 on the pine.

Jesse Bromwich joins the side at prop while Jared Waerea-Hargreaves also earns a rest.

In the backline, Dean Whare returns at centre and Manu Vatuvei on the wing, replacing Krisnan Inu and Jason Nightingale respectively.

The Kumuls will have a tough challenge in front of them improving on their 38-4 defeat at the hands of Samoa – especially given the dominant nature of the Kiwis’ 48-0 win over France, the heaviest defeat of the tournament to date.

Watch Out New Zealand: Pride, passion and desperation will be the Kumuls’ biggest assets here but don’t discount NRL regulars Ray Thompson and David Mead, as well as local product Jessie-Joe Nandye. Nandye has been arguably the best of the Kumuls, with a Paul Gallen-esque 163 metres from 21 runs and 35 tackles in the opener against France – and that coming off the bench! He backed that up with 104 metres and 37 tackles, as well as his side’s only try, when promoted to the starting side in the loss against Samoa. Those sorts of numbers will have him firmly stamped as a player to watch for New Zealand.

Watch Out Papua New Guinea: A modicum of relief perhaps, with the Kiwis’ leading metre-eater, ferocious prop Waerea-Hargreaves rested, but that just means other players will look to step up. It’s still a giant pack and Ben Matulino (a massive 207 metres against France), Sam Kasiano (124 metres off the bench against France) and Jesse Bromwich (103 metres off the bench against Samoa, and now promoted to start) will all be looking to make a statement.

The Kumuls will well and truly have their work cut out trying to bring down this monster pack and if they can’t contain them, the likes of Roger Tuivasa-Sheck and Josh Hoffman in the backs could run riot.

Key Match-Up: David Mead v Josh Hoffman. Mead is one of the few NRL regulars in the Kumuls side and, that one missed goal notwithstanding, he has really stood up with 124 metres in the first game and a massive 229 in the second. Hoffman has had to endure criticism of his suitability for the fullback role and answered in style with two try assists and one try in his only game so far, against Samoa.

The Way We See It: The Kiwis were in a different class to the French in their second match of the tournament, while the Kumuls were simply outclassed against a strong Samoan team. With the gulf in class and experience here looking even greater than either of those two matches we fear it could be a long night for the gallant Kumuls. Kiwis by plenty.

Hope the crowd at Headingley agree.

Some 40/20s from Johnson would be nice. Might need them in the play-offs.

Difficult to get 40/20s when you spend nearly all the time in the opposition half!
Reactions: TerryG

SBW was MotM, Lulu could be out for the remainder of the series. Kiwis still have room to improve.

Will face Italy or Scotland next.

Last try by Wellington Albert may have been the highlight of the game.

Real shame about Leuluai. I was very keen to see him play. He would certainly have given us a few more option in attack. I guess that's injuries for you.