I am very much looking forward to this match between Wigan and Hull FC, coming from the DW Stadium. Both teams are undefeated, so the 59th league meeting between these two rugby league heavyweights should be a cracking affair indeed.

The_Fanatical_Rooster said:
It will be interesting to see how he goes with Madge and co out here. While I believe he has matured and improved significantly as a player, playing with a squad like the Tigers will be a very different proposition to that of the Warriors. I wish him well, but it will be quite a challenge.
Click to expand...

He always seemed to have ability - it never quite got out though on the field in the NRL.

This game had almost everything, including an allegation of racism. The only thing missing was a send off.

Fair play to Hull FC. I sat up to watch it, even though I nodded off a couple of times! Josh Reynolds played quite well. They learned from their loss against us last week. The Super League will have to be our focus now.

Wigan Warriors' Zak Hardaker has been banned for two matches following his dismissal for a headbutt in his side's heavy defeat against Catalans Dragons.

Hull Kingston Rovers ended their miserable run of form at Wigan with an impressive victory in Super League. after 12 years Hull KR won 18 - 8.

Umyla Hanley scored a hat-trick as Wigan Warriors cruised to a Super League victory over bottom side Leigh.

Both sides played most of the game with 12 men after Wigan's Brad Singleton and Leigh's Jack Ashworth were sent off for fighting after 15 minutes.

Liam Hood's try had cancelled out Thomas Leuluai's early effort, but Hanley and Liam Farrell both scored twice as Wigan led 28-6 at the break.

Captain Tommy Leuluai may have played his final game for Wigan after head coach Adrian Lam confirmed a hamstring injury would end his season.

Leuluai, 36, scored one try in 14 games in 2021 before the injury against Leigh Centurions earlier this month, and is out of contract this winter.

The 2008 New Zealand World Cup winner has had two spells at Wigan, winning Super League twice and a Challenge Cup.

Wigan Warriors secured fourth place in Super League and a play-off spot after victory over a Hull FC side whose own hopes were truly quashed.

After a scoreless opening half, which could only be described as a grinding arm-wrestle, Jake Bibby put Wigan ahead from a Jackson Hastings kick.

Zak Hardaker dinked a kick in behind which he touched down to extend the visitors' lead.

Hull, who failed to score, came closest through Manu Ma'u in the first half.

With the play-offs looming and a multi-team tussle to reach the top six, there was something in this game for both sides but in the event it was Wigan who came up with the result they needed.

Wigan Warriors will play Leeds in the first round of the Super League play-offs after beating leaders Catalans Dragons in the regular-season closer.

Willie Isa scored the only try of the first half to put the Cherry and Whites in front at the DW Stadium.

Mathieu Laguerre added a second Dragons try but again James Maloney missed from the tee as the Dragons fell short.

The visitors suffered a more telling blow losing Sam Tomkins to injury during the first half of the match.

Meanwhile, the Catalans will have a week off to prepare for their semi-final in which they are 80 minutes from a first Grand Final.

England coach Shaun Wane has returned to Wigan in a "leadership" role as part of a reshuffled backroom team of new head coach Matt Peet and assistants Sean O'Loughlin and Lee Briers.

He has had just one game with England because of Covid, a postponed World Cup and a cancelled Australia Test series.

Peet and O'Loughlin are promoted from within, while Briers is a new arrival.

Wigan Warriors have signed half-back Cade Cust on a two-year deal from NRL side Manly Warringah Sea Eagles with the option of a further year.

Cust came through his local junior side Scone Thoroughbreds before being scouted by Manly where he developed.

The 23-year-old has played 27 games in the NRL for Manly, scoring nine tries.

The Hensingham amateur from Cumbria joined Workington in July 1994 and played in their 1996 Super League campaign before moving to Wigan.

Holgate was a Grand Final winner in the inaugural game against Leeds at Old Trafford in 1998, and featured in the top flight for Hull and Halifax.

Wigan did enough to overcome a dogged Castleford side who had Brad Martin sent off and lost Mahe Fonua to a game-changing sin-binning.

Fonua went for a late shot at the end of a first half in which Zak Hardaker and Liam Farrell tries gave Wigan the advantage, with Greg Eden replying.

Cas conceded two tries while a man down, to Ethan Havard and Jai Field, before Farrell stretched the lead.

However, the dismissal of Martin for a high tackle on Willie Isa, about which there was no controversy, took the wind out of Castleford's sails and Wigan could finally relax.

Fonua's sin-binning has come in the midst of a crackdown by referees on tackles against players passing or kicking the ball, but replays seemed to suggest that the contact with Wigan's Field was in the act rather than after the ball had gone.

Wigan head coach Matt Peet wanted a response after the 28-0 defeat by Catalans last weekend and he got one, with an inspired Field tearing Castleford apart with his pace.

Jai Field sent the hosts ahead but Adam Swift and Danny Houghton went over to put the visitors in front at the break.

Ethan Havard hit back for Wigan early in the second half before Chris Satae sent Hull back in front soon after.

Field once again went over to level it at 18-18 but Smith successfully kicked from long range to seal it for Wigan.


The result moves Wigan above Catalans and St Helens to the top of the Super League table and ends Hull's three-game winning run, with the visitors remaining in fifth.

After Field had put Wigan in front, two quickfire tries from Swift and Houghton put Hull in a commanding position just before the half-time hooter.

Houghton's score came following a succession of excellent passes on the wing before he was played clean through to touch down and complete an impressive first-half turnaround.


Satae's try came courtesy of some great work from Joe Lovodua who found him in space and put in a last-ditch offload for him to score Hull's third.

But Field, who is Super League's top try-scorer this season, scored his ninth try of the campaign after a clever dummy to run in almost from halfway.

Hull FC had been just minutes away from taking the game to golden point before Smith scored his second match-winning drop-goal of the season, repeating his heroics from their game against Toulouse.

Thursday's fixture was also the first for Bevan French since May 2021 as the Wigan playmaker made his return from injury.

Australian full-back Jai Field has signed a new two-year deal with Super League side Wigan Warriors, with the option of a third year.

The 24-year-old has scored nine tries in eight games this term, having been limited to just four appearances in 2021 because of injury.

Field has established himself at full-back in Bevan French's absence, and leads the 2022 Man of Steel rankings.

The 29-year-old was found guilty of a Grade E charge of dangerous contact.

Liam Marshall's late score gave them a narrow 16-14 win over Huddersfield Giants in a thrilling game at the Tottenham Hotspur Stadium.

Peet is in his first season as Wigan boss after taking over from Adrian Lam.

Wigan Warriors are devastated to hear of the passing of former player Bill Ashurst. 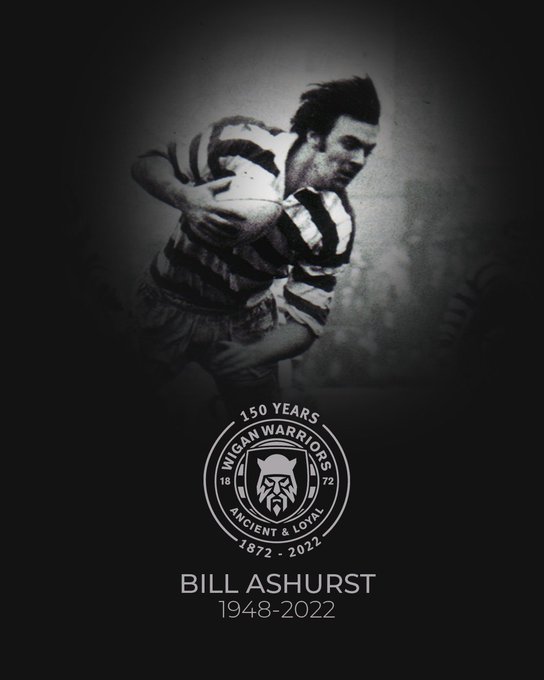