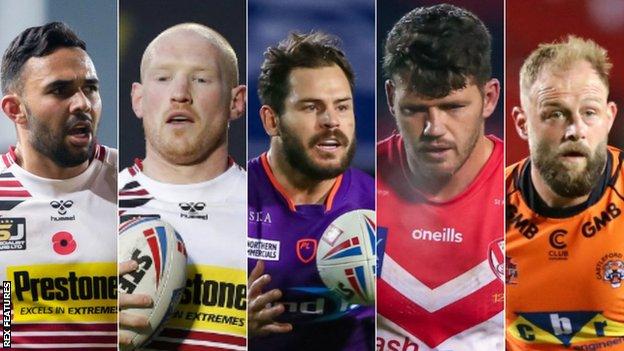 The back-rower, who last week announced his retirement at the end of the season, is also joined in the squad by hooker Amir Bourouh.

Hull are in their first semi-final since 2017, and make just one change with Jack Brown replacing Josh Jones.

Coincidentally, Hull's last final-four play off appearance came in defeat by a Leeds side who had a similar emotional send-off for club legends in Rob Burrow and Danny McGuire.

O'Loughlin, who has already lifted four Super League titles in his career, is bidding to put a fifth winners ring on his fingers.

However, there is no time for sentiment from Warriors coach Lam when it comes to team selection, as Wigan are among the form teams.

Rabbits 21 said:
Is this their Grand Final?

No, the following week is.

I think Wigan would and should be favourites.
Reactions: Rabbits 21

Wigan ruthlessly despatched Hull FC to secure their place in the Super League Grand Final with a dominant display.

After Marc Sneyd's early penalty, Wigan turned the game round with clinical finishing from Joe Burgess and Harry Smith.

Hull had begun the first half well but were never allowed to get into the game by Warriors' relentless defence.

And Zak Hardaker, Jake Bibby and Bevan French tries brutally took the game away from the visitors.

Wigan will face either St Helens or Catalans in the Grand Final on Friday, 27 November.

Saints lost James Graham before the break to a head injury, but led 14-2 with Lachlan Coote and Naiqama tries.

For Saints, it was a stylish way to reach a record 12th Grand Final.

Catalans, who were without the suspended duo of Michael McIlorum and Joel Tomkins, again put in an ill-disciplined performance with the sin-binning of James Maloney and Ben Garcia either side of the break being heavily punished by the champions.

Players from eight different sides have been included in the Super League Dream Team for 2020.

Seven of the players in the team have been included for the first time.

S J said:
Players from eight different sides have been included in the Super League Dream Team for 2020.

Seven of the players in the team have been included for the first time.

A few names that sound familiar.

In celebration of the biggest night in Super League coming to Hull for the first time, the city of Hull will be lit up on Friday 27 in the competition colours, which at final whistle will change to the team colours of the official 2020 champions. From dusk till dawn the buildings in Queen Victoria Square will be a wash of blue and red, including: The Hull City Hall, The Ferens Art Gallery, and the Maritime Museum.

Hull has a rich Rugby League history, which was only recently celebrated in an interview with playing and coaching legend Johnny Whiteley for Remembrance Day; and Roy Francis and Clive Sullivan in celebration of Black History Month during October.

Fittingly, a city divided by Super League rivalry; Rovers or FC, East or West, have this season stood in solidarity with former Hull Kingston Rovers player Mose Masoe, who at the beginning of 2020 sustained a life-changing spinal injury. Accordingly, Masoe will also be celebrated on the night of Grand Final.

Rugby League major events will return to the KCOM next year for the Rugby League World Cup 2021.

Castleford Tigers' Paul McShane has been named as the winner of the 2020 Steve Prescott Man of Steel award.

The 31-year-old was in inspired form this season, despite his side finishing eighth in Super League, appearing in every game.

He is the fifth Castleford player to receive the prestigious award.

Wigan duo Bevan French and Liam Farrell had also been in contention, along with Huddersfield's Aidan Sezer and St Helens full-back Lachlan Coote.

The big prize of the 2020 Super League season will be decided in a derby decider between minor premiers Wigan and 2019 champions St Helens, in Hull.

After an elongated season affected by Covid-19, the two old foes, who finished first and second respectively, progressed to the showpiece final.

Saints won the last Grand Final meeting of the two clubs back in 2014.

Sam Powell returns at hooker for Wigan, but Ben Flower - sent off in that final six years ago - misses out on what would have been his last appearance.

Saints had concerns over Graham after he went off through concussion protocols in the semi-final against Catalans, but he is included along with fellow prop Alex Walmsley.

As with Leeds in 2015 and 2017, and Wigan in 2018, emotional incentives provide a strong narrative to the Grand Final and 2020 is no exception with both teams keen to send their talismanic figures out on a high.

Welsby's decisive try came after the full-time hooter, touching down after a drop-goal attempt hit the post.

Extra time was imminent with the score 4-4, Lachlan Coote with two penalties and Wigan's Jake Bibby scoring a try.

But Welsby pounced as Bevan French hesitated to claim a thrilling win.

Having the youngest player on the field score the winning try in such sensational fashion gave Saints, England and Great Britain legend James Graham a triumphant farewell.

But it was a heart-breaking way to send Wigan talisman Sean O'Loughlin into retirement.
Reactions: Rabbits 21