Fouad Yaha put Catalans ahead in a repeat of the 2021 Grand Final but two tries from Tommy Makinson, plus James Roby and Lewis Dodd scores followed.

The second half was a real slugfest, as the game threatened to boil, notably when Catalans' Dylan Napa was sent-off.

Hurrell certainly made a big impact in that game.
Napa? continues in the same style that got him in so much trouble in Oz.
Reactions: S J

stanleyg said:
Hurrell certainly made a big impact in that game.
Napa? continues in the same style that got him in so much trouble in Oz.
Click to expand...

Jack Welsby went over for Saints midway through the first half while Tommy Makinson crossed for their second try.

Makinson went over once more after the break to put them in control, with Mark Percival further extending their lead with Jonny Lomax scoring late on.

Warrington's only points of a miserable evening were confined to Stefan Ratchford's early penalty goal.


St Helens maintain their lead at the top of the Super League table thanks to their fifth win in a row this term, while Warrington lose their second game in a row after suffering defeat to Catalans last time out.

Saints were reduced to 12 players after 17 minutes when Sione Mata'utia was sent to the bin for an off-the-ball hit on George Williams.

Williams joined him in the bin seven minutes later after being penalised for offside and Saints made easy work of scoring the first try through Welsby soon after, when he ran on to Lomax's perfect grubber kick to the corner.

Super League champions St Helens put their shock first defeat of the season at new boys Toulouse behind them as they ran in five tries to win in some style at Leeds.

The Rhinos have now lost all five games at Headingley this season - their worst start to a campaign since 1898.

Leeds put in a game effort, as they limited Saints to two first-half tries from Konrad Hurrell and Tommy Makinson.

St Helens delivered a relentless performance in a bruising Super League derby victory against Wigan Warriors in front of a sellout 17,980 crowd.

Jai Field burst through off an inside ball to scorch in for a Wigan try, but Tommy Makinson's spectacular corner dive brought the home side level.

Jonny Lomax finished off a Makinson break for a half-time lead and Joe Batchelor's try extended the advantage.

Mark Percival finished off a fumbled kick to kick-start the Saints' party.

Abbas Miski was close to a consolation for Wigan, but had his foot in touch.

The attritional, physical nature of this most ferocious of rivalries came at a cost to both teams with Saints losing back row Morgan Knowles to a failed head-injury assessment and Wigan saw half-back Tommy Leuluai sidelined by a potential cruciate ligament problem.

St Helens have lost young half-back Lewis Dodd for the rest of the season with a "significant" Achilles injury.

St Helens ensured they will go into the Challenge Cup final break top of the Super League after victory over a Warrington side that made them sweat.

Gareth Widdop gave the Wire a surprise early lead, but Saints roared in front before half-time through Alex Walmsley and Tommy Makinson scores.

Saints had ample chances to add to the lead, but could not execute and George Williams' try made it a two-point game.

Makinson's goal-kicking proved key in the end as the Wire came up short.

Saints open up a four-point lead over Wigan and Catalans at the top with this win, albeit with the rest of their rivals yet to feature, but their players will certainly feel every bump and bruise after a tough examination of their character.


Wire were chastised for their second-half collapse at Catalans last weekend but they showed real mettle to run the champions close all the way to the final hooter.

Daryl Powell's rebuild of Warrington has stuttered since he arrived last winter, but his side were physical and tenacious, while the decision to put Widdop at full-back proved inspired.
Reactions: stanleyg

St Helens full-back Jack Welsby has signed a new contract to keep him at the club until 2025.

He has crossed six times in 15 games so far this season and was the 2021 Super League Young Player of the Year.
Reactions: stanleyg

Morgan Knowles, Tommy Makinson and Konrad Hurrell all crossed to cancel out Chris Hankinson's early goal as Saints built a 14-2 lead at the break.

Harrison Hansen went over as bottom side Toulouse responded well, but Jack Welsby and Regan Grace's interception try put the leaders out of sight.

An all-French team of officials took charge of the match after scheduled referee Liam Moore and touch judge Liam Rush were left stranded in Munich because of a catalogue of travel delays.
Reactions: stanleyg

Tonga centre Konrad Hurrell has signed a new deal with reigning champions St Helens to run until the end of the 2023 Super League season.

The 30-year-old joined Saints from Leeds for this season to link up with Tonga head coach Kristian Woolf, and has five tries in 15 games so far.

Hurrell had previously been linked with a potential return to Australia's National Rugby League beyond 2022.

St Helens fought for a hard-earned win against Huddersfield with 12 players to maintain their Super League lead.

Saints had Sione Mata'utia sent off early on but Joe Batchelor put the depleted home side ahead by half-time.

Agnatius Paasi put Saints further ahead after the break with Jack Welsby adding to their tally before the hour mark.

The hosts had Morgan Knowles sent to the bin in the final stages but Jonny Lomax wrapped up the win as they saw out the match with just 11 players.

Jack Walker gave Hull an early lead before Will Hopoate levelled things up.

Makinson got the scoreboard ticking with the first two tries, before Jack Welsby crossed to leave KR 20-0 down at the break and all but out of it.

Saints were without the injured Sione Mata'utia, while Morgan Knowles and Curtis Sironen were missing through suspension, but they had Welsby back as they moved a step closer to lifting another League Leaders' Shield.

They got off the mark in the second minute when Makinson kicked a routine penalty before diving over for the first try of the night, after Jonny Lomax and Welsby had combined, then kicking his own conversion from the touchline to make it 8-0 to the home side.

Will Hopoate and Konrad Hurrell then combined for Makinson's unconverted second try on 22 minutes before Welsby threw a huge pass to the left for winger Bennison, who passed the ball back inside for Welsby to race under the posts.

St Helens captain James Roby has signed a one-year contract extension to keep him with the Super League club for a 20th year.

Roby has made 518 appearances since his debut against Widnes in March 2004.

St Helens withstood a spirited second-half effort from Salford to win their Super League semi-final and book a Grand Final date against Leeds.

Ryan Brierley brought Salford back within a point in the second half with his breakaway score.

Jon Bennison touched down late on to ensure the job was done for Saints.

This victory means the Saints can still send off departing coach Woolf with a Grand Final to remember, as they hunt a fourth straight showpiece success in a row.

The 25-year-old England international lost his initial appeal against the ban for "dangerous contact".

Victory for Saints against Leeds at Old Trafford meant they surpassed their previous record of three straight wins, jointly held with the Rhinos.

Woolf led them to another title in his final game before joining newly-formed NRL side the Dolphins for 2023. 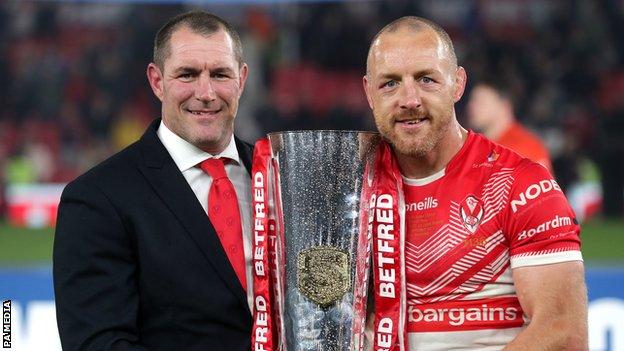