Regan Grace has signed a contract extension which will keep him at St Helens until the end of the 2022 Super League season.

The Welsh winger has scored 70 tries in 116 appearances since his debut in 2017.

Grace, 24, has also impressed for Wales in the World Cup Nines.

Jack Welsby scored a hat-trick of tries as St Helens recovered from their first loss of the season to beat Hull FC.

Defending champions Saints got going early when Welsby went in at the corner and Lachlan Coote crossed soon after.

Adam Swift cut the deficit but Morgan Knowles and Welsby's second put the hosts firmly in control at the break.

Welsby completed his hat-trick before Mahe Fonua got Hull back in it, but Joe Batchelor's first of the season ensured a hard-fought win for the hosts.

St Helens got off to an ideal start when Hull misread Coote's opening kick allowing the hosts to regain the ball on halfway.

Despite the lack of talismanic winger Regan Grace, who missed out due to a knock picked up in their defeat by Catalans last time around, Saints did not take long to get off the mark.

Within just three minutes, Welsby used Saints' advantage when he worked onto Jonny Lomax's pass to race in at the corner and it was a lead the hosts never lost.

The victory means St Helens bounce back from their defeat in Perpignan and win the first of two consecutive meetings with Hull ahead of next week's Challenge Cup semi-final in Leigh.

Jack Welsby ran in a hat-trick as St Helens overpowered Hull FC to keep up their pursuit of Super League leaders Catalans Dragons.

Defending champions Saints went 16-0 up thanks to tries from Joel Thompson, Tommy Makinson and Welsby before Adam Swift scored against his old club.

Bureta Faraimo scored in the corner to reduce the arrears for Hull.

Kristian Woolf's side had last week's game against Huddersfield postponed because of Covid-19 protocols but there was little sign of any lasting issues as they kept their cool against a Hull side with plenty of threats.

The Challenge Cup holders had enough to match the big Hull pack although Matty Lees had to be withdrawn after failing a head injury assessment, and had the class to open them up out wide for tries from Makinson, Welsby and Naiqama.

Hull's two tries came in each half with the prolific Swift scoring from a Saints error, while Faraimo leapt highest for his score.

However, indiscipline cost them when Jordan Johnstone and Ligi Sao both spent time in the sin-bin in the last 20 minutes.

St Helens will sign Tonga international Will Hopoate from Australian National Rugby League side Canterbury Bulldogs on a two-year deal for the 2022 season.

Hopoate, 29, has played 180 first grade games and scored 45 tries either side of a two-year Mormon mission stint.

He played five State of Origin games for New South Wales and has 11 caps for Tonga, who are coached by Saints boss Kristian Woolf.
Reactions: stanleyg

St Helens winger Tommy Makinson will still miss Friday's derby with Wigan despite having his ban for a high tackle cut to just two games on appeal.

Makinson, 29, was banned for three games for the 64th-minute challenge on Niall Evalds in last Thursday's defeat by Castleford Tigers.

The operational rules tribunal have now downgraded the offence from a Grade C to a Grade B but his £300 fine remains.

He also misses the home game with Leigh but is now free to play at Warrington.

The disciplinary panel's summary said the England international had "tried to tackle, but [was] reckless about the outcome".

St Helens captain James Roby has signed a new one-year contract to remain with the reigning Super League champions for a 19th season.

The 35-year-old academy graduate has spent his entire career with the club and he has made 485 appearances.

A figurehead in the St Helens side during his tenure, Roby has also won caps for England and Great Britain.

Harry Smith scored Wigan's only points with his first-half penalty goal, with Alex Walmsley adding a late emphatic try to wrap it up for Saints.
Reactions: The_Fanatical_Rooster

Harry Smith scored Wigan's only points with his first-half penalty goal, with Alex Walmsley adding a late emphatic try to wrap it up for Saints.
Click to expand...

Tell me about it

S J, I got up to watch it, didn't I! You think I would have learnt my lesson by now.
Reactions: S J

St Helens bounced back from their Magic Weekend disappointment against Catalans, sealing a top-two finish with a thumping home victory against Leeds.

Saints did the damage in the first half with prop Alex Walmsley scoring one of five tries in a rampaging display.

Sione Mata'utia ran in a sixth after the break before Morgan Knowles' second added to Regan Grace, Jack Welsby and Tommy Makinson tries.

Brad Dwyer got Leeds' only score, as they struggled to break Saints down.

The defeat is a blow to the Rhinos' play-off hopes, as a congested top-eight battle for the remaining three places to join minor premiers Catalans, Saints and Warrington in the top-six play-offs.

St Helens have signed former Salford Red Devils hooker Joey Lussick from NRL side Parramatta Eels on a three-year deal from the start of 2022.

The 25-year-old helped the Red Devils to the 2019 Super League Grand Final as well as the 2020 Challenge Cup final.

After his two-year deal with the club ended last season, he joined Parramatta ahead of the 2021 season.

The 34-year-old prop joined Saints from Wakefield in 2013 and has scored 20 tries in 206 appearances.

St Helens' win in the penultimate round of the regular Super League season has no bearing on Friday's play-off semi-final, says head coach Kristian Woolf.

Saints were dominant in the 40-6 win, with try-scoring England prop Alex Walmsley outstanding.

Leeds recovered to win their last two matches, including an 8-0 eliminator success against Wigan last week.

Regan Grace gave the reigning champions an early lead, which James Roby extended before Richie Myler got Leeds on the board just before half-time.

After beating Wigan in Hull to win last season's showpiece, St Helens will now return to Old Trafford - the scene of their Grand Final victory over Salford in 2019 - to face the League Leaders' Shield winners a week on Saturday.

The 25-year-old was charged with a Grade A high tackle.

Knowles has featured 13 times for Saints in Super League this season and was part of the team that won the Challenge Cup in July.

Victory on Saturday would give them a first double since 2006.

England international Morgan Knowles has signed a new four-year deal with Super League champions St Helens, to keep him at the club until 2025.

The back-rower, 25, is part of a Saints side that has won three titles in a row and made his England debut this year, having previously represented Wales.

Barrow-born Knowles has played 149 games for Saints, who he joined aged 16, since making his first-grade debut. 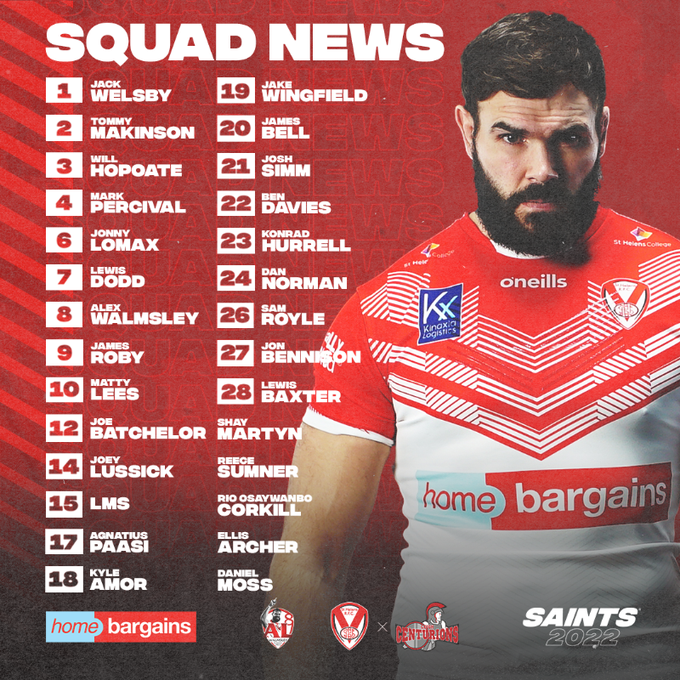 St Helens winger Regan Grace will miss the first month of the 2022 Super League season after suffering a bicep injury in pre-season training.

The 25-year-old, who has helped Saints win the past three Super League Grand Finals, required surgery on the injury.

Fouad Yaha put Catalans ahead in a repeat of the 2021 Grand Final but two tries from Tommy Makinson, plus James Roby and Lewis Dodd scores followed.

The second half was a real slugfest, as the game threatened to boil, notably when Catalans' Dylan Napa was sent-off.