He won eight Grand Finals, three World Club Challenges and two Challenge Cups in 17 years with the Super League side.

By Friday evening, more than 5,000 donors have given to an online appeal launched on Thursday by the Leeds Rugby Foundation.

The money will support his treatment and his wife and three young children.

Leeds Rhinos thanked "everyone who has shown their love and support" for Burrow.

Burrow is the club's reserve team coach, having led the Rhinos Academy team for the past two seasons.

He retired from playing at the end of the 2017 season having been capped 15 times by England and playing five Tests for Great Britain.

The Rhinos were comfortable winners of the annual festive friendly, beating Trinity 30-4 at Headingly.

It was the first run out for the England international, 31, since October 2018 after a long lay-off.

The 38-year-old forward retired from playing at the end of 2019 after 21 seasons with the Headingley side.

He made 421 appearances for the Rhinos and won seven Grand Finals, one Challenge Cup and three World Club Challenges.

Rhinos will be without at least three senior players when their season begins next month.

Winger Tom Briscoe was already set to miss the round-one clash with Hull on Sunday, February 2, after undergoing a knee reconstruction last year.

Dragons pocket rocket Jai Field on Leeds radar. One of the game's fastest little men, Field can play fullback, five-eighth and halfback, and at 22, has yet to reach his full potential.

He can only come back a better player.

Rhinos looked fresh following the postponement of their round-two game at Huddersfield and raced clear with two Harry Newman tries and a Cameron Smith score, replied to by Greg Minikin.

Richard Agar's side were a totally different proposition to the team heavily beaten at home by Hull FC on the opening weekend of the Super League season, and the Robins simply could not live with their intensity.

Leeds Rhinos ran riot with six tries to thrash a listless Warrington side that was kept scoreless at Headingley.

Jack Walker's third try in as many games, two Rhyse Martin penalties and a Richie Myler score put the dominant hosts 14-0 up at the break.

Brad Dwyer finished a scrappy third try for Leeds before Konrad Hurrell crashed over in the corner.

Two tries in two minutes from Ava Seumanufagai and Ash Handley competed the victory to lift Leeds to second.

After starting the season with a heavy 30-4 defeat by Hull at Emerald Headingley, the Rhinos have gone on to win three successive Super League matches and scored 88 points at home along the way after beating Hull KR 52-10 a fortnight earlier.

Warrington, who have failed to win away from home since last July, remain seventh in the table after suffering their third defeat in five games this term.

Leeds Rhinos have signed England forward Joe Greenwood on a two-month loan from Wigan Warriors. The 26-year-old, who joined Wigan from National Rugby League side Gold Coast Titans in June 2018, has not played for Warriors this season.

But he made 21 appearances for the Super League side last term.

Leeds produced an 11-try demolition of Toronto to move top of the Super League with their fourth straight victory.

It took just four minutes for Leeds to score through hooker Brad Dwyer before Richie Myler went under the posts.

It all added up to a miserable night for Toronto head coach Brian McDermott on his first return to Leeds, the club he led to four Super League titles during his eight years in charge at Headingley.

His side's losing run since promotion extended to five matches as their defence had little answer to the lively, varied attack by the home side.

The visitors enjoyed their best period of the match - indeed, their only positive period - in the 10 minutes after half-time where they fronted up much better in defence to keep Leeds out and after forcing a penalty, Josh McCrone created space for Jack Wells to score their second try.

But from the restart, Toronto knocked-on, Cameron Smith powered his way over and the game resumed the pattern of the opening 40.

It was during the first half that Leeds scored the pick of their tries. Right on the half-time hooter, a chip up the right wing was splendidly gathered in by Harry Newman and he offloaded for Handley to go over for Leeds' sixth try of the first half.

But the biggest cheer of the night was saved for two minutes from time as Dwyer broke into space and sent Hurrell, the Tonga international who danced live on television after his side's victory over Warrington, galloping under the posts.

Leeds Rhinos forward Joe Greenwood says he was tested for coronavirus, but the results came back negative.

Leeds Rhinos will not face disciplinary action from the Rugby Football League after they refused to travel for their game at Catalans Dragons in March. The Rhinos postponed the game, scheduled to take place behind closed doors, because forward Joe Greenwood had shown symptoms of coronavirus.

Greenwood, who is on loan from Wigan, subsequently tested negative. RFL chief executive Ralph Rimmer said no action would be taken because of the "exceptional circumstances". He had initially warned that it was a "possibility" the Rhinos could face sanctions.

Super League will restart on 2 August with a triple header at Headingley, four months after coronavirus forced a halt to the season.

Hull KR take on Toronto Wolfpack in the first game, while St Helens will play Catalans and Huddersfield face Leeds.

The home of Leeds Rhinos will stage the first three rounds of fixtures.

S J said:
Super League will restart on 2 August with a triple header at Headingley, four months after coronavirus forced a halt to the season.

Hull KR take on Toronto Wolfpack in the first game, while St Helens will play Catalans and Huddersfield face Leeds.

The home of Leeds Rhinos will stage the first three rounds of fixtures.
Click to expand...

Unless I misread it, BBC Sports just said the Wolfpack are too broke to complete the Season.

Maybe SBW will pay back his salary? 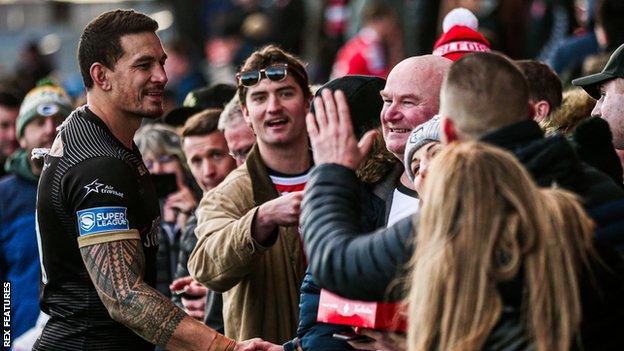 New Zealand legend Sonny Bill Williams was Toronto's star signing before the start of the Super League season
There will be no relegation from Super League in 2020.

The Rugby Football League (RFL) said the decision was made "for reasons of integrity, player welfare and also to protect the solvency of clubs".

The news came hours after Toronto Wolfpack said they would take no further part in the 2020 season because of "overwhelming financial challenges" posed by the Covid-19 pandemic.

The RFL also said the 2020 Championship and League One seasons will not resume.

A survey of the Championship and League One found that the majority of teams would not support playing behind closed doors.
Instead, teams will be invited to play in a competition in the autumn that will celebrate the sport's 125th anniversary, with a prize of £250,000 on offer.

Canadian outfit Toronto had been playing in English rugby league's top flight for the first time after winning promotion from the Championship, but have opted to withdraw from the rest of the campaign.

The Wolfpack say they still "fully intend to field a team in the 2021 season".

Toronto, who will also be withdrawing from the Challenge Cup, said in a statement: "This decision has not been taken lightly, and in consideration of a range of factors specific to the club as the only transatlantic team in the league.

"Greatly reduced ticket, sponsorship, merchandise and game day revenue streams have resulted from the loss of all 11 of the team's home Super League games in Toronto.

"The Wolfpack would be left covering significant additional costs simply to complete a season of games in the UK, including Covid testing, stadium rentals, medical costs and player pay increases to align with the rest of the league."

BBC Sport reported on 15 July that Toronto could be forced to pull out because visa issues may have prevented seven of their players from taking part.

They were bottom of the table when the season was suspended in March, having lost all of their opening six games.

The club say they will now be working with Super League and the RFL to "understand" the process with regards to next season.

In a joint statement, Super League and the RFL said they were "very disappointed" to learn that Toronto would be withdrawing after "firm assurances had been received as recently as last Thursday" regarding their participation.

"The club's decision is especially disappointing given the imminent restart of the season," the statement added.

"Our immediate focus is on getting the season back under way on 2 August and meeting the needs of our host broadcaster, Sky Sports."

'We'd heard rumours for months'
Toronto had been due to face Hull Kingston Rovers in the first game of a triple-header at Headingley to mark the restart of the season, with the teams scheduled to have met again two weeks later on 16 August.

Hull KR chief executive Mike Smith said Toronto's withdrawal will have "an impact for the game and for the sport".

He told BBC Radio Humberside: "We'd heard rumours for weeks and months about the situation, but we just got on with running our own club.

"[But] it's not great when one of the Super League clubs just pulls out at this late stage.

"The problem we have is we were onto version four of the fixtures because it was such a minefield trying to put so many clubs in a short period of time and cram in as many fixtures as possible, with overseas travel to France now in the mix as well.

"Now potentially from 1 October there could be home games as well, there's quick turnarounds, the Challenge Cup to fit in with some teams still in, so I've an awful lot of sympathy with the fixture committee."
Reactions: S J

Leeds have signed back row Bodene Thompson from Toronto Wolfpack.

The 32-year-old New Zealander has agreed a deal that runs until the end of the current Super League season.

Thompson had a nine-year career in the NRL playing for Gold Coast Titans, Wests Tigers and New Zealand Warriors.

A depleted Leeds Rhinos fought back to beat Huddersfield Giants after being forced to stand down seven players as a precaution under Covid-19 protocols.

One member of Leeds' squad was awaiting results of an antigen test after a family member showed symptoms.

Six other players who had been in close contact with the player earlier in the week also sat out the match.

Challenge Cup finalists Leeds moved up to fourth in Super League with victory over a Hull FC side only drafted in to play less than 24 hours previously.

Hull scored early tries from Mahe Fonua and Andre Savelio, but were overhauled by the break by Jack Walker's double and Ash Handley's sharp finish.

Handley completed a hat-trick after the break to add to tries from James Donaldson and Liam Sutcliffe.

Tries from Josh Griffin and Jack Brown kept Hull's interest up until late on.

Luke Gale helped Leeds overcome Castleford with a try against his former side after the Tigers' Oliver Holmes was shown a first-half red card.

Holmes was sent off in the 30th minute after he lashed out at Richie Myler.

While Gale put Leeds ahead against 12-man Castleford, two Greg Eden tries either side of the break put the visitors 18-12 up.

The 21-year-old's new contract comes after he helped them to a 14th Challenge Cup triumph.

The 32-year-old New Zealander initially joined the Rhinos in August on loan from Toronto Wolfpack and spent three months at Headingley.