One Saints team is going well.
Good on St Helens.

Sonny Bill Williams is set to play in the 2020 Challenge Cup after Toronto Wolfpack's re-admission was confirmed.

The Canadian club took part in the competition in each of the first two years of their existence in 2017 and 2018 but withdrew last season after being told to pay a bond.

Wolfpack did change their mind, but it came too late for them to enter. They will play all their ties away due to logistical issues in arranging games in Canada at short notice.

Toronto will enter the cup at the fifth round stage on the weekend of 14 and 15 March.

The draw for the first round of the Challenge Cup will be shown live on the BBC Sport website on Thursday. A total of 44 teams will be in the hat, including Thatto Heath Crusaders, who made it to the fifth round last season. RFL Vice-President Carl Hall and England Wheelchair player Wayne Boardman will make the draw at 18:30 BST.

Super League sides enter in the fifth and sixth round including 2019 winners Warrington Wolves.

First round ties will be held over the weekend of 11-12 January. 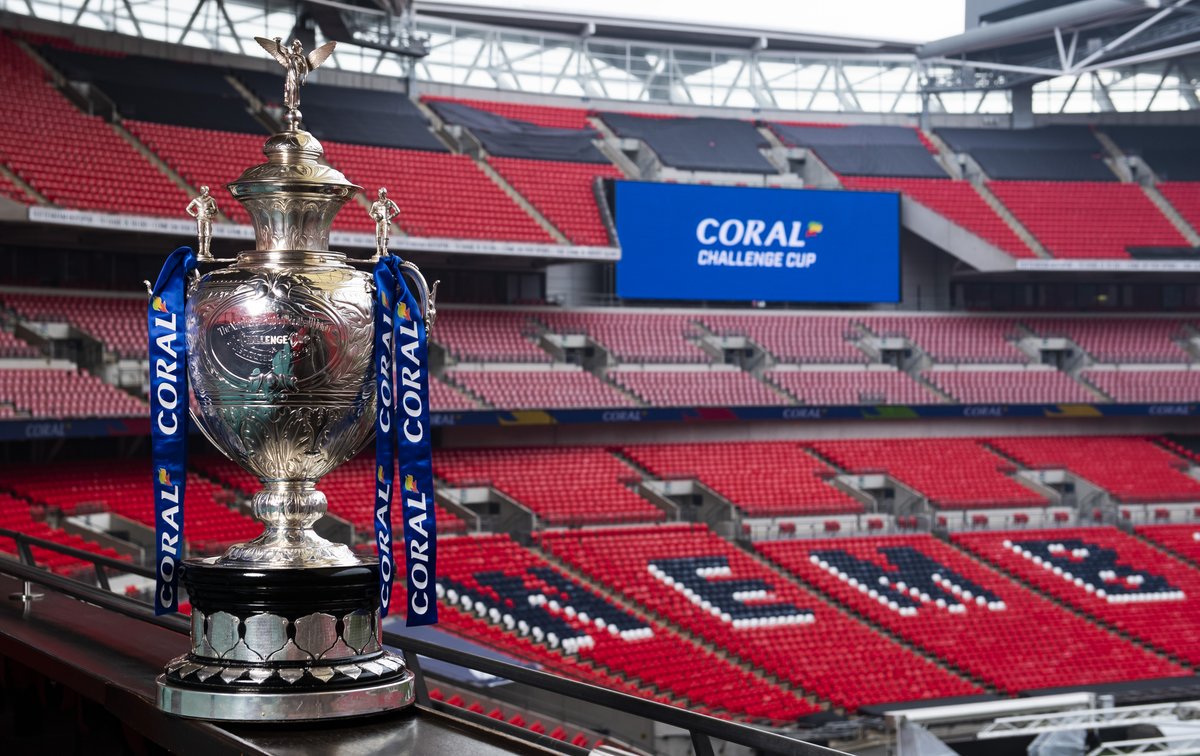 Thatto Heath Crusaders will face Thornhill Trojans in the first round of the 2020 Challenge Cup.

Thatto Heath reached round five last season before being knocked out by Championship club Dewsbury.

First-round ties will be held over the weekend of 11-12 January, with one game being streamed live by BBC Sport.

Super League sides enter in the fifth and sixth rounds, including 2019 winners Warrington Wolves, who beat St Helens in the final at Wembley.

Entry into the Cup is mandatory for the English and Welsh professional teams, but is by invitation for all other clubs, either professional or amateur.

The mouth-watering all-Yorkshire Coral Challenge Cup First Round tie between Skirlaugh and Hunslet Club Parkside will be shown live on BBC iPlayer, BBC Sport Online iPlayer and via Red Button on Saturday 11 January (kick off 12.30pm).

22 other first round ties will take place over the weekend of 11-12 January, with the second round scheduled for 25-26 January and the third for 8-9 February when semi-professional League 1 clubs enter the competition. Championship clubs enter the fray two weeks later in round four, while four Super League clubs – Huddersfield Giants, Hull KR, Wakefield Trinity and Toronto Wolfpack – will enter at round five on the weekend of 14-15 March.

The last thing any younger sibling wants is to be bossed about by their elders.

What is even worse for youngest sibling Jack is that he also plays as a hooker for the National Conference League side.

They hit the front in the first half and were 4-0 up at the break.

They grabbed another try shortly after the restart and, despite their Leeds-based visitors hitting back with a converted score with 25 minutes to play, they held on and secured their progress to the next round.

Elsewhere, Ashton Bears' Coral Challenge Cup debut ended with a convincing 58-10 on the road at Edinburgh Eagles, as Barrow Island ran out 84-6 winners against Welsh outfit Rhondda Outlaws in Cumbria.

Fellow Cumbrians Distington won 50-10 at home to Bedford Tigers, and there were away wins for both West Hull - 28-18 at Pilkington Recs - and West Bowling, who pulled off a 24-12 win against Featherstone Lions.

York Acorn dispatched of London's Hammersmith Hills Hoists 36-14 in North Yorkshire, and it was a comfortable 38-0 win for Siddal who hosted Saddleworth Rangers.

Elsewhere, West Bank Bears won a thriller 26-24 at home to the Royal Navy and Milford Marlins made a statement of intent with a fine 47-12 win over Wigan St Judes, and Wigan St Pats moved into round two with a hard-fought 30-14 victory at home to Dewsbury Moor.

London Chargers' Coral Challenge Cup journey came to an end at Rochdale Mayfield as they fell to a 32-12 defeat, while the British Army progressed thanks to a 26-10 home win over Oulton Raiders on home turf.

Finally, there were home wins for Wigan's Ince Rose Bridge - 50-10 against East Hull, and Leigh Miners Rangers, who edged out a fine clash at home to Leeds outfit Stanningley, winning 28-26.

And the RFL can also confirm a repeat of last year’s Coral Challenge Cups triple header at the University of Bolton Stadium, which will again host the women’s final followed by the two men’s semi-finals.

The 2020 triple header will be played significantly earlier in the summer than last year, on 6 June as the Coral Challenge Cup Final at Wembley has been brought forward from late August to 18 July.

All three games at Bolton will again be shown live by the BBC, with kick-off times and coverage details to be confirmed when tickets go on sale shortly.

The BBC first covered the Challenge Cup Final in 1948 and has shown rugby’s oldest national knockout competition every year since 1958.

In 2020, BBC Sport will stream one fixture from each of the first five rounds of the Coral Challenge Cup, and televise two games from the Sixth Round and the Quarter Finals, before both Semi Finals and the Final from Wembley Stadium.

The Second Round draw will be broadcast live on BBC Radio Leeds on 14/1.

The Coral Women's Challenge Cup begins in March, with coverage of all rounds leading up to the final on the RFL's Our League platform.

Tickets for the men’s Coral Challenge Cup Final are available now at eticketing.co.uk/rugbyleague

The British Army will host Skirlaugh in the second-round of the Challenge Cup.

The East Yorkshire side beat Hunslet Club Parkside 8-6 in the first round on Saturday, while British Army beat Oulton Raiders 26-10.

Siddal, who hosted Toronto Wolfpack in their first ever competitive game in this competition in 2017, host Ashton Bears.

All ties are to be played on the weekend of 25-26 January.

League 1 clubs enter the competition in round three, to be played the weekend of 8-9 February.

Championship sides then enter two weeks later in round four (to be played weekend of 22-23 February), while four Super League clubs - Huddersfield Giants, Hull KR, Wakefield Trinity and Toronto Wolfpack - will enter at round five on the weekend of 14-15 March.

The remaining Super League clubs, including last season's winners Warrington, enter the competition at round six, which will be played on the weekend of 4-5 April.

The stand-out tie of round two of the Coral Challenge Cup, between National Conference League champions West Hull and another of the community game’s most famous clubs, Wigan St Patricks, will be shown live on BBC Sport Online, BBC iPlayer and via Red Button on Saturday 25 January (kick off 12.30pm).

And on Sunday 26 January Our League will feature the game between Mansfield-based Midlands’ champions Sherwood Wolf Hunt, who defeated London’s Wests Warriors to claim their place in round two, and Bradford’s West Bowling. Kick off at Debdale Park Sports Club is 1.30pm. Admission is £2.50 for adults, and free for under 16s, and the Wolf Hunt will donate all proceeds from ticket sales to the Rob Burrow fund.

The 11 winners will join the 11 teams from Betfred League 1 in the hat for the third round draw, which will be hosted by Rochdale Hornets on Monday 27 January at 6.30pm. All 14 Betfred Championship clubs will enter the competition at round four, followed by four Betfred Super League clubs at round five and the rest at round six.

BBC Sport and the Rugby Football League will continue to stream games up to and including the fifth round, with the BBC televising two ties from the sixth round and the quarter finals, and then both semi finals which will be played along with the Coral Women’s Challenge Cup Final in a triple header at the University of Bolton Stadium on Saturday 6 June.

The 2020 Coral Challenge Cup Final will be played at Wembley Stadium on Saturday 18 July.