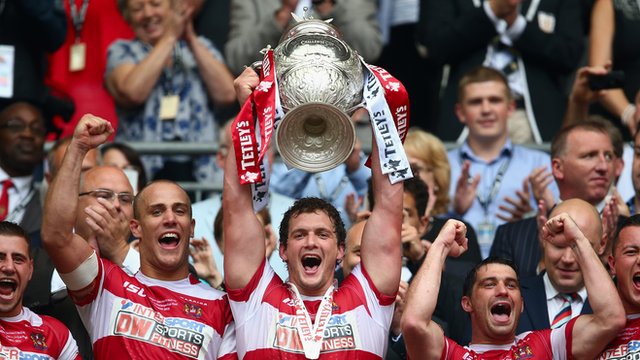 Wigan were made to fight for a record 19th Challenge Cup final victory as they finally saw off a hard-working Hull FC at a rain-soaked Wembley.
Warriors centre Iain Thornley, on 21 minutes, and full-back Sam Tomkins, in the last minute, scored the only tries of an error-strewn contest.
Pat Richards converted both and kicked two penalties as Hull's curse of never having won at Wembley continued.
Wigan's Matty Smith was voted man of the match to win the Lance Todd Trophy.
The scrum-half became the 15th Wigan player to win the coveted award, following in the footsteps of club legends such as Martin Offiah, Dean Bell and Jason Robinson, as he helped the Warriors win the cup for the second time in three years.
Hull had last lifted the trophy when they beat Leeds at Cardiff's Millennium Stadium in 2005 but recent history between the Airlie Birds and Wigan pointed to a Warriors win.
The Cherry and Whites had beaten the Black and Whites in their last eight league meetings, while Wigan sit four places - and nine points - above Hull in the Super League table.
Yet Hull showed just what they are capable of by overturning Warrington in the semi-finals. And, at the first wet Wembley final in 18 years, the potential for spills in the slippery conditions made the outcome even harder to call.
But in a game effectively ruined by the weather, a 16-point winning margin - and the first Wembley 'nilling' since Wigan did it to St Helens in 1989 - was tough on Hull, for whom too many key players, notably Daniel Holdsworth and Jacob Miller, treated the ball like a bar of soap.
For all the handling errors, it was still a battle right from the first hooter when Richards handed Hull a psychological lift by launching his kick-off straight into touch.
Wigan had the better of the first half in terms of possession and territory as Hull, who missed England forward and captain Gareth Ellis for much of the game after picking up an early rib injury, were let down by their handling at too many key moments. 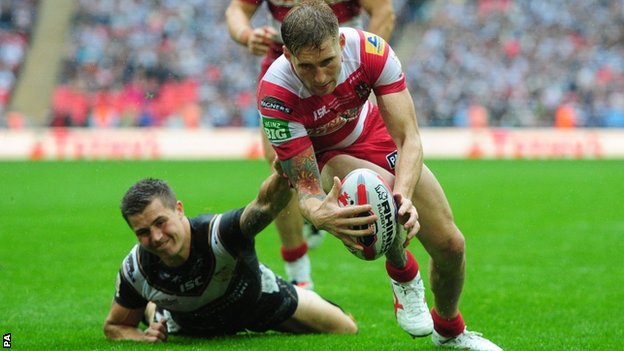 But, despite several close shaves, notably when referee Phil Bentham ruled that the try-scenting Richards had not grounded the ball behind the line, the Warriors only had one try to show for it.
That came on 21 minutes when young centre Thornley picked up a loose throw 20 yards out, threw a dummy and touched down in the left corner, his 19th try in 30 appearances, Richards adding the extras.
Scrum-half Smith was just wide with a cheeky drop-goal attempt from the last kick of the half, but he was then also involved in the incident that allowed Wigan to stretch their lead to 8-0 within three minutes of the resumption.
Smith was caught late by Richard Whiting after his deft chip through for Scott Taylor and, although the Wigan replacement forward was stopped on the line, referee Bentham brought the play back to give Richards the penalty in front of the posts.
Hull then suddenly looked like they were about to get on the scoresheet 10 minutes into the second half when, from inside his own 22, full-back Jamie Shaul jinked his way through and headed for the left corner hot in pursuit of what looked like being one of Wembley's great tries.
However, Wigan winger Josh Charnley got back at full gallop to not only overhaul him but remove the ball from his grasp to win back possession and prevent what had seemed a certain try.
And, on 62 minutes, Wigan stretched their lead to 10-0 when Aaron Heremaia gave away a penalty and Richards fired his third successful kick via the left upright.
Despite the loss of centre Darrell Goulding on a stretcher, Wigan maintained their composure, their red-and-white wall of a defence remaining unbreachable for the entire 80 minutes.
There was even the extra tonic of a second try in the dying seconds when the artful Tomkins jinked his way through to match brother Joel's Wembley try in 2011.
Richards added the goal to take his tally for the afternoon to eight points - and 100 in this competition - a fitting farewell for the Australian winger in his final Challenge Cup appearance before returning down under at the end of the season.
Whether Tomkins, linked with moves to rugby union and Australia's NRL, will also be playing his rugby on the other side of the world next season remains to be seen.

Hull played one of there worst games in some time and Wigan weren't that great either.
Reactions: TerryG

I knew someone who followed Hull FC.

We could do with something similar here.

1896 i think is when the CC started. We indeed could do with a CC type comp but the insular coaches and admins of Australia would never allow it.

How did Tomkins play NU.

I thought he was one of the best on the paddock. Nothing outstanding but he was very solid.

Just been watching highlights of the 1989 Cup Final, Wigan v Saints. I was there! I don't know if youse guys can see this; I know there are territorial restrictions on youtube.


What a side Wigan had then: Steve Hampson at full back, and a back-line of the Iro brothers, Dean Bell, and Joe Lydon. The peerless Gregory and Edwards in the halves, and a fella called Ellery Hanley at loose forward. Hanley scored a ridiculously brilliant solo try, slaloming through the Saints defence.

I would have been watching that game live Moto in 1989. Best club side in the world were Wigan.
Reactions: moto748

You were living in England back then, NU?

moto748 said:
You were living in England back then, NU?
Click to expand...

I wish. No i mean i was up in the small hours of the morning watching the game. I used to get up and watch all league tour matches from England, Wales and France and well as the FA cup and Challenge cup.

This is a top comp.
Reactions: Northern_Union 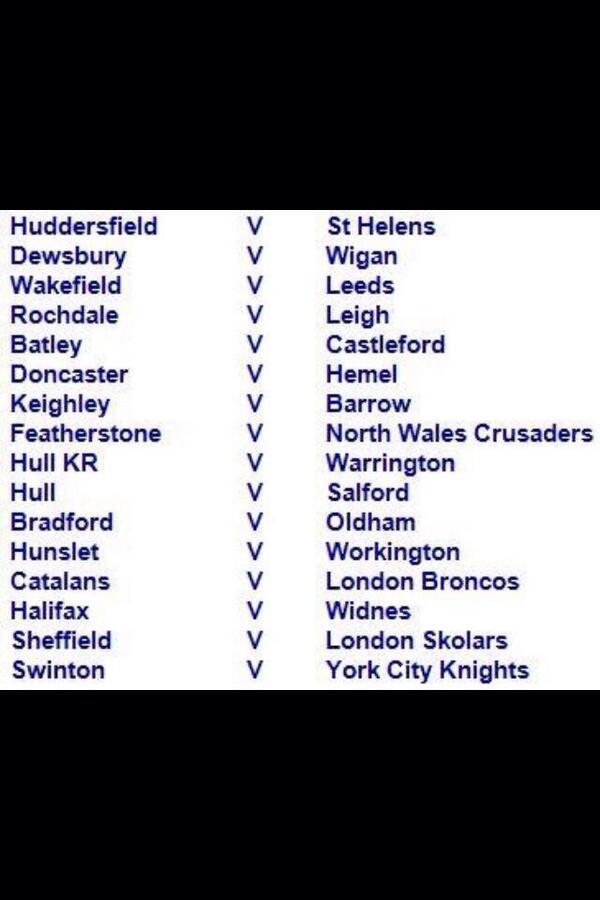 "With some trophies we've had handles coming off, and it's even survived being thrown off a team bus before. It's luck of the draw if that happens - if it lands on the right place it may end up with very little damage, and the surface won't buckle. It's like a car - sometimes you'll get a dent from the slightest touch, and other times you bump it pretty hard and you can't even tell."

Tom Fattorini is part of the sixth generation of the same Fattorini family who made the original Challenge Cup in 1897, for the princely sum of £60 (equivalent to around £16,000 at today's prices).

"Fattorini's weren't given any particular commission, just told to come up with something prestigious," says Tony Collins, professor of social history of sport at Leeds Metropolitan University. They did a magnificent job, though, and the original Rugby League Challenge Cup lasted 104 years before in 2001 it was finally deemed too fragile to continue being presented.

It had lost its fluted top and the players on each handle had been damaged. The silver was also wearing thin and there was little space left for new winners' names to be engraved on it. It is now kept in a safe at the RFL's headquarters at Red Hall, Leeds, and the trophy used is an exact reproduction, made with a strengthened neck, and the winners' name shields have been resized so the 111 winners (to date) can all fit on it!

There are also now a few rules in place which help to preserve the new trophy. If taken out of a secure cabinet, it always has to be in the presence of someone. Indeed, someone has to sleep in the same room if it's out overnight. And if it goes on a car journey, there have to be two people in the car so it's never left unattended.

When the trophy travelled to France for some Catalans publicity photos in 2007, it even had its own seat on the plane. Surely they should have upgraded it to first class? So the days of throwing it out of team coaches are thankfully long gone. But whatever happens to one of British sport's most famous trophies, it'll still be back at Fattorini's next year for some more tender loving care.

The Tetley's Challenge Cup is Rugby League's most historic and prestigious competition and is the only knock-out tournament of its kind to include teams from all levels of the sport. Local community teams, student and the armed forces all compete alongside the elite of Super League.

First played in 1897 the Tetley's Challenge Cup has a history and tradition like no other. The competition comes to its dramatic conclusion at the iconic Wembley Stadium on August Bank Holiday in front of 80,000 fans from all parts of the Rugby League family.

In keeping with the competition’s unique history the day begins with The Champion Schools final featuring the two best school teams at year 7 when the stars of tomorrow have their opportunity to display their skills on the famous Wembley pitch.

The draw for the fourth round of the Tetley’s Challenge Cup will take place at 3.45pm on Tuesday March 18 from Quay House, MediaCityUK, and will be broadcast live on BBC 5 Live Extra, BBC Radio Manchester, BBC Radio Leeds and BBC Radio Humberside.

The fourth round sees the entry of the 14 First Utility Super League clubs, who join the 18 winners of this weekend’s third round ties in a competition that will climax with the 2014 Tetley’s Challenge Cup final at Wembley Stadium on Saturday August 23.

Wigan Warriors are the current holders of Rugby League’s oldest and most prestigious knockout competition, which was first contested in 1897.

The fourth round of the Tetley’s Challenge Cup will be played over the weekend of April 5-6. One tie will be broadcast live on BBC TV on Sunday April 6 with a 2.15pm kick-off.

The full 2014 Tetley’s Challenge Cup schedule is as follows:

Tickets for the 2014 Tetley’s Challenge Cup final at Wembley Stadium on Saturday August 23 cost from as little as £22 and can be purchased by calling the RFL Ticket Office on 0844 856 113 or by visiting www.rugbyleaguetickets.co.uk.

S J said:
In keeping with the competition’s unique history the day begins with The Champion Schools final featuring the two best school teams at year 7 when the stars of tomorrow have their opportunity to display their skills on the famous Wembley pitch.
Click to expand...

And they've all played there as schoolboys: Sam Tomkins, Shaun Edwards, etc etc.

The Challenge Cup Final is still my sporting highlight of the year, a unique occasion.

The Challenge Cup Final is still my sporting highlight of the year, a unique occasion.
Click to expand...