The Everest is the richest turf race in the world with the unique buy-in sprint feature worth an unprecedented $15 million. Inaugurated in 2017 the Special Condition feature takes place at Royal Randwick Racecourse in late October as the key event of the Sydney Spring Racing Carnival.

Now part of a wider The Everest Carnival full of seven-figure races, The Everest is contested by 12 of the world’s fastest horses and takes place over 1200m as a weight-for-age race.

There are 12 spots in The Everest field with positions purchased by slot holders at a cost of $600,000 each. Those slot holders then select a star horse to represent them in the event, which is now recognised as one of the world’s most iconic horse races despite original concerns it would be seen as a race only for elitists.

Slots in this race can be traded, sold as shares or leased and give those in the mix a shot at taking out a first prize purse of $6.2 million!

The opening two editions of The Everest race were won by Redzel before a new race record was set by the Chris Waller-trained Yes Yes Yes in 2019, the three-year-old defeating the older sprinters in brilliant fashion.

The Everest is billed as the “world's richest race on turf” with twelve of the fastest horses competing over a distance of 1200 metres at Randwick Racecourse for prizemoney of $14,000,000.

The total prizemoney for The Everest is $15 million The prize money is currently split as follows:

All 12 slots are currently up for grabs for The Everest 2021 but horses can come and go so the field won’t be finalised until 7.30am on race morning.

This uncertainty regarding the make up of the field makes doing form for the race tricky prior to the final field being established.

The field for the race is declared once all slot holders have confirmed their runners.

The barrier draw is conducted today.

Even after a couple of lazy weeks in hotel quarantine, Australian Olympic sprint pin-up Rohan Browning clocked a sizzling 11.46 seconds over 100 metres to upstage The Everest hope Lost And Running at Randwick on Monday.

Given a 120m head start by Lost And Running and his jockey, Hugh Bowman, Browning channelled his inner thoroughbred, pinning back his ears to thunder past the winning post a couple of lengths clear. 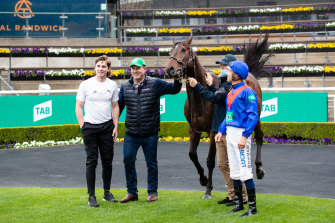 On tomorrow too - along with the Caulfield Cup.

My outsider may not get a run.